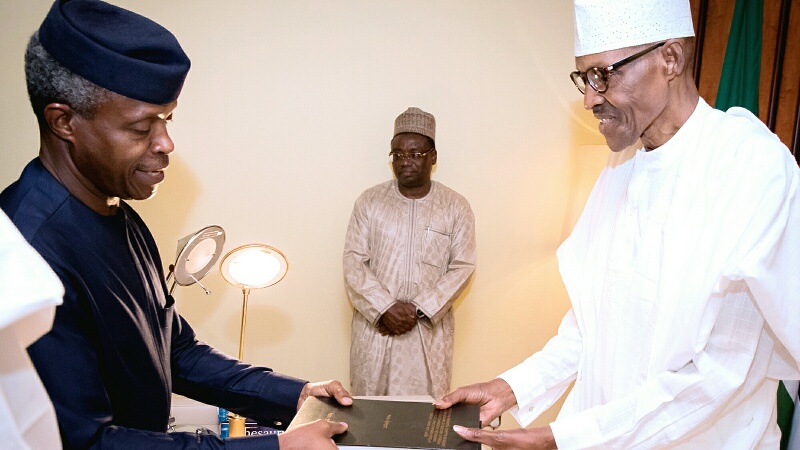 President Muhammadu Buhari (R) receiving the report of the Probe Panel on the suspended Secretary to the Government of the Federation (SGF), Babachir Lawal and Director-General of National Intelligence Agency (NIA), Ayodele Oke from Chairman of the Panel, Vice President Yemi Osinbajo, at the Presidential Villa in Abuja on Wednesday (23/7/17). 04482/21/8/2017/Ikwunze Ewelike//NAN

Mr. Lawal was suspended from his position as Secretary to the Government of the Federation, SGF, while Mr. Oke was suspended as head of the National Intelligence Agency, NIA.

He declined comments on the details of the report.

“Of course, I cannot (provide details of the report),” he said. “How can I?

“This is a document which has just been submitted to the president. He is the one who will read the recommendations and the facts and then make a decision.”

The president had on April 19 constituted the Osinbajo panel to investigate the corruption allegations levelled against Mr. Lawal by the Nigerian Senate and that against Mr. Oke by the Economic and Financial Crimes Commission.

The National Security Adviser, Babagana Monguno, and the Minister of Justice, Abubakar Malami, were also on the panel.

The Senate accused Mr. Lawal of breach of Nigeria’s law and code of conduct for public officers in the handling of contracts awarded by the Presidential Initiative for the North East, PINE, an agency under him.

With damning documents, the Senate said he awarded contracts to companies in which he was a director as at the time of the awards and also took bribe from other beneficiaries.

On the other hand, Mr. Oke’s travails started after the discovery of large amounts of foreign and local currencies by the EFCC, in a residential apartment at Osborne Towers, Ikoyi, Lagos.

The NIA said the money belonged to it but the EFCC still went ahead to secure a court order forfeiting the money to the Nigerian government.

Mr. Buhari directed investigation into the circumstances in which the NIA came into possession of the funds, how and by whose or which authority the funds were made available to the NIA. He also asked the panel to establish whether or not there had been a breach of the law or security procedure in obtaining custody and use of the funds.

When asked if justice would be served in the cases involving the two top government functionaries, Mr. Osinbajo said public interest would be served.

“Well, as you can imagine, we are always fair minded and the whole approach is to ensure that justice is done in all cases. It is in the interest of the government and also the interest of the nation that things are done properly and that there is due process and that we are not unfair. You can be sure that we will do the right thing,” he said.

Then, there was a particular question: “Are heads going to roll?”

In response to that, the vice president said: “No, how can I tell you? If you want to know what is in the report you have to wait, you really have to wait.”

He also could not state when the decision to be taken by the president would be made known to the public, stressing, again, that it was for his boss to make the decisions, after studying the report.

“All I can now say is that we have submitted the report to the president and it is a very detailed report as a matter of fact. The president has to study the report and make decisions,” Mr. Osinbajo said.

“It is fact finding committee as you know and what our terms of reference were, was to find out based on the fact available to us and based on the interviews of witnesses of what transpired in those cases of the report: one involving the SGF and the other the DG of NIA.

“We have now concluded that and we submitted a full report with recommendations to the president. We cannot of course give you any kind of details because the president has to look at the report, study it and then make his own decisions based on that report.”

The Senate had first made accusations of corruption against Mr. Lawal in December last year, and then asked that he be suspended and prosecuted.

But in January, Mr. Buhari rejected the Senate’s indictment of his cabinet secretary, saying he was not given fair hearing; before suspending him, alongside Mr. Oke, four months later.