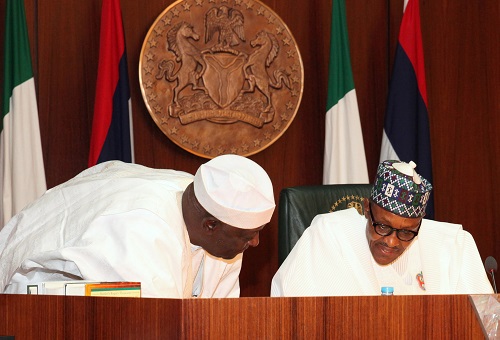 The weekly meeting of the Federal Executive Council (FEC) will not hold Wednesday, according  to President Muhammadu Buhari’s spokesperson, Femi Adesina.

Mr. Adesina,  in a statement, said Mr. Buhari will rather  receive the report of the investigation committee into the allegations against the suspended Secretary to the Government of the Federation (SGF), Babachir Lawal, and the Director-General of the National Intelligence Agency (NIA), Ayodele Oke.

The committee is headed by Vice-President Yemi Osinbajo and it will submit its report to the president in his office at noon,  Mr. Adesina said.

Mr. Buhari returned to Nigeria on Saturday after spending 103 days in London for medical treatment.

The president had constituted the panel to investigate the corruption allegation levelled against the suspended SGF by the Nigerian senate and that against Mr. Oke by the Economic and Financial Crimes Commission.

He was to receive the report on May 8 but his health condition deteriorated, forcing him to return to London on May 7.