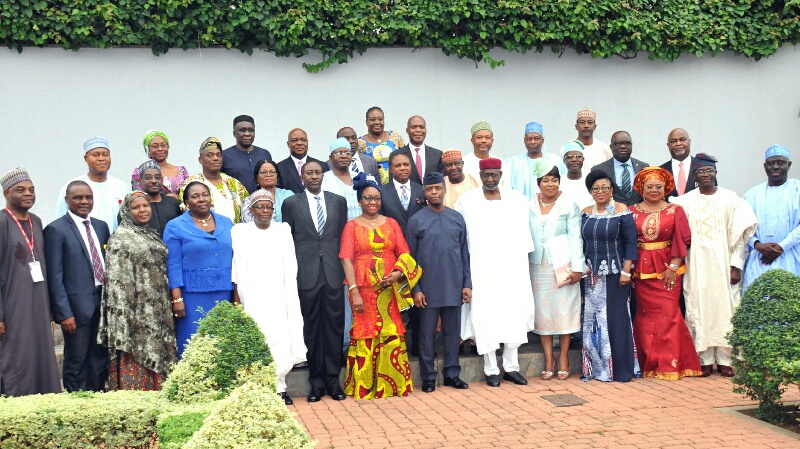 On May 24, 2014, PREMIUM TIMES exclusively reported that Gabriel Aduda, a former official of the Economic and Financial Crimes Commission and brother to Senator Phillip Aduda, was arbitrarily appointed director at the Federal Ministry of Finance despite failing a compulsory confirmation/promotion examination for federal civil servants.

The report generated widespread uproar across the country at the time, with many calling for the removal of the director from his post.

The Goodluck Jonathan administration, reputed for massive corruption and serial abuse of due process, however failed to act at the time, and Mr. Aduda was allowed to stay on.

Three years on, the Muhammadu Buhari administration has elevated the controversial official to the position of permanent secretary.

Mr. Aduda is among the 21 new permanent secretaries appointed by Acting President Yemi Osinbajo on August 10. He is also among the 15 inaugurated on Wednesday.

He was deployed to the Political Affairs Office, Office of the Secretary to the Government of the Federation.

Laolu Akande, the spokesperson to Mr. Osinbajo, could not be reached to comment for this story Thursday morning. He did not answer or return multiples calls made to him.

But an official in the acting president’s office, who requested not to be named because he is not an official spokesperson, said Mr. Osinbajo was never made aware of Mr. Aduda’s antecedent.

“I am sure Mr. Osinbajo would be shocked to hear this,” he said.

A former senior official of the Economic and Financial Crimes Commission, EFCC, who allegedly failed the compulsory confirmation/promotion examination for federal civil servants, is now a top director in Nigeria’s Federal Ministry of Finance.

Gabriel Aduda worked as Head, Strategy and Reorientation Unit, of the anti-corruption agency in 2012 on Grade Level 15 when he took the compulsory examination, which all civil servants must pass before their appointments are confirmed.

PREMIUM TIMES gathered that Mr. Aduda, a brother to ruling party politician and Senator, Phillip Aduda, failed the examination and then resigned after a re-mark of his papers showed that he indeed performed poorly.

But barely six months after his resignation, Mr. Aduda was named the Director in charge of the Economic Research and Policy Management Department of the Federal Ministry of Finance, an appointment that shocked both his former employers and some top officials of the Federal Civil Service Commission.

Mr. Aduda however told PREMIUM TIMES that he did his best in the examination but that he was deliberately marked down, saying he was a victim of “vendetta attack” at the EFCC.
“The claim that I failed the examination is miles away from the truth,” he said. “The truth is that I took the examination as prescribed by law. But, I was shocked when I was told later when the result was out that I failed. Of course, I rejected the result and called for my papers, which were shown to me by the Director, General Services.

“Then I wanted to establish two things. One, to know from the Director what the pass mark was for officers in my grade level, and two, whether the pass mark was fixed prior to the examination or after. When the answers were not forthcoming, it became clear that it was pure vendetta against my person.”

He wouldn’t answer further questions, insisting that this reporter should visit the EFCC to assess his exams script himself.

But the EFCC insisted Mr. Aduda indeed failed the examination and that he was not victimized in any way.

“This matter you are talking about has to do with his employment history with the commission and the records are there,” EFCC Spokesperson, Wilson Uwujaren, said. “Besides, the EFCC does not have a history of victimizing present or past employees. The person involved in this matter has moved on and the commission would not like to comment any further on the matter.”

Mr. Aduda, a brother to Philip Aduda, Chairman of the Senate Committee on Power, joined the EFCC on February 2009.

Between September 2000 and October 2004, he also served on the Board of the Independent Corrupt Practices and Other Related Offences Commission, ICPC.

The public service rules requires that all administrative, foreign affairs, executive and police officers, along with their counterparts in the para-military and other professionals in the service, must pass confirmation/promotion examination within two years of their appointments.

Unless specially exempted, Public Service Rule 020302 stipulates that all affected officials must, within the mandatory probationary period, pass the examination prescribed in Chapter 6 of the law appropriate to his or her appointment.

Public Service Rules 060203 and 060204 make it mandatory that any officer who fails to pass the examination after three attempts, or fails to take the confirmation examination after 3 years of his or her first appointment must resign from the service forthwith.

Consequently, more than three years after he was hired by the EFCC, Mr. Aduda was one of the officials due for the compulsory confirmation examination at the end of their probation period in line with those provisions of the Public Service Rule.

When the result of the examination was released Mr. Aduda failed in his first attempt in 2012.

He then petitioned the organizers, whom he accused of deliberately marking him down. But when his papers were re-marked, Mr. Aduda still did not make a pass mark.

But rather than take another shot at the examinations, Mr. Aduda resigned and left the Commission in anger in January 2013.

When asked whether it was aware of the circumstances under which Mr. Aduda left the EFCC, the Federal Civil Service Commission, FCSC, which hired him for the new job told PREMIUM TIMES it didn’t bother “about what may have happened or did not happen during his time at the EFCC, as this was a fresh appointment.”

At the Federal Ministry of Finance, Paul Nwabuikwu, the Special Adviser on Media to the Minister of Finance, who said he would not comment on the allegations against Mr. Aduka, claimed the director is highly regarded and seen by many as one of the brightest, youngest senior officials in the Ministry since he assumed office.

The hands of President Jonathan

The HCSF had in a memo to the President claimed that Bayelsa and Ebonyi states as well as the Federal Capital Territory, FCT, where Mr. Aduda comes from, were without substantive directors in the Federal Civil Service.

In response, Mr. Jonathan granted presidential approval for qualified indigenes of those states to be hired as directors.

Mr. Aduda was one of the three that benefited from the Presidential gesture. The others include Famous Eseduwo for Bayelsa, and Idowu Afe for Ebonyi states.

Mr. Aduda was later assigned to the Ministry of Finance, where he is currently in charge of the highly sensitive Economic Research and Policy Management Department, ERPMD, while Mr. Eseduwo was posted to the Public Complaints Commission, PCC. Mr. Afe now works with the Federal Civil Service Commission.

The ERPM department is charged with undertaking systematic analyses of the national economy and developing models for forecasting possible future trends; making comparisons with other economies, and forecasting how developments in the global economy might affect the country’s economy.

It is also to generate data and information required to evaluate and plan the activities of the Ministry of Finance on the national economy and socio-political developments, among others.

Some officials at the finance ministry say Mr. Aduda qualified as a town planner and does not have the competence for the job he has been given.

“This is a classic case of man-know-man (nepotism),” one source said. “And for as long as we allow this kind of sentiment to dominate our affairs, Nigeria will never make progress.”