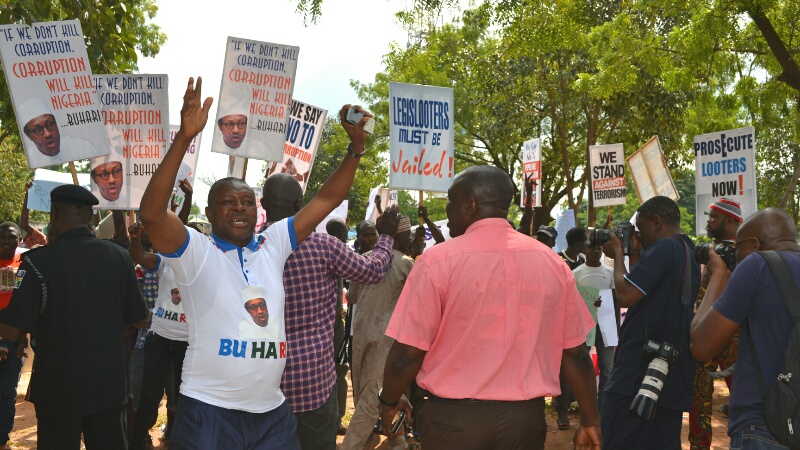 The daily rally by #ResumeOrResign group convened by Charles Oputa, popularly called Charly Boy, was on Friday disrupted by members of a group sympathetic to President Muhammadu Buhari.

Mr. Oputa’s group had started its rally on Monday to protest the prolonged medical vacation of the president in London.

It said it would hold the rally until the 100th day of the president’s departure from the country. Mr. Buhari left Nigeria 95 days ago.

Less than 20 members of the group had gathered at the Unity Fountain, Abuja, for the fifth day of the rally until the venue was intruded by members of the other group rallying in support of the anti-corruption fight of the president.

Dozens of youth in the pro-Buhari group stormed the venue chanting ‘Sai Baba Sai Baba’, forcing members of the Charly Boy-led group to beat a hurried retreat from the premises.

Security operatives however intervened quickly to avert a violent clash of the two groups.

The convener of the pro-Buhari group, Goodluck Obi, was also seen yelling at the members of his group to avoid confrontation.

Mr. Obi said their gathering was to support the anti-corruption policy of President Buhari and also to disabuse the minds of Nigerians of the impressions being created by the”Resume or Resign” group.

He said the call for the resignation of the president was unnecessary.

“We want to let people know that it is not only illegal, unconstitutional and to no effect, it is also null and void. The constitution does not support it,” Mr. Obi said.

“Section 141 of the Nigerian Constitution, which is the most respected document of the country, supports the fact that if the president is traveling and he perceives that he would be away for long, he should transmit his powers to the vice president, which is exactly what our honorable president has done.

“Prof. Osinbanjo, in his capacity as the Acting President, is doing well. We also want to use this opportunity to warn Nigerians, lest some few elements destroy the democracy we have built for so long.

“Buhari is a man of honor, he’s a man of valor, and he’s a man of integrity. He has all it takes to be the president and we are standing by him,” Mr. Obi added as he addressed journalists observing the drama.

Deji Adeyanju, one of the conveners of the #ResumeOrResign group, however countered that his group would not relent until the presidency discloses the medical status of President Buhari.

“This is the right thing to do. It is important to know that today is the 95th day that our president has been away from Nigeria on medical tourism,” Mr. Adeyanju said.

“President is undergoing chemotherapy in the UK, like it is reported in the media.

“Are the reports true that the president has cancer, and that he is undergoing chemotherapy, that that’s why he cannot return?” Mr. Adeyanju said in a press statement he later issued.

“The Presidency must give Nigerians full disclosure on the health statue of our president. The president is not above the Nigerian people.