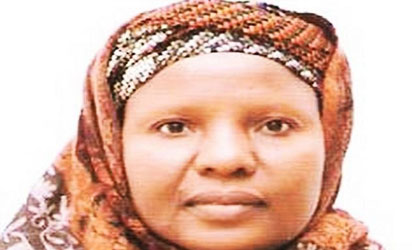 A female academic who was confirmed Resident Electoral Commissioner-designate by the Nigerian Senate has been plunged into a state of apprehension after the Office of the Secretary to the Government of the Federation withheld her appointment letter without explanation.

Asmau Maikudi, Katsina State nominee, was amongst eight candidates confirmed by the Senate on June 20 following their nominations by President Muhammadu Buhari.

She was the only female of the 27 nominees that Mr. Buhari forwarded to the Senate in March.

Senators initially stepped down confirmation process for all of them in a fallout sparked by a string of constitutional disputes between the executive and the legislature.

But after weeks of negotiations, the lawmakers finally agreed to screen the candidates on May 2, confirming the first batch of 15 nominees on June 1.

Of the remaining 12 candidates, Ms. Maikudi, 55, was the first on the list of eight that scaled through on June 20. Confirmation for the remaining four was deferred indefinitely for reasons ranging from legal disputes to federal character.

After weeks of delay, the eight RECs-designate were asked to come for their appointment letters at the OSGF. But despite being the first on the list, Ms. Maikudi watched as her counterparts were called in for their letters, leaving only her out.

“When I asked for my letter, they told me it hadn’t been signed by the SGF,” Ms. Maikudi, a lecturer at Kaduna State Polytechnic told PREMIUM TIMES Thursday evening.

Her subsequent appeals for explanation fell on deaf ears, she said.

Ms. Maikudi said she suspected no specific foul, as she has worked outside politics all through her career.

“I have been an academic since I graduated in 1983,” she said, adding: “I have never had anything to do with politics and I believe the president’s decision to nominate me had no political connection.”

The OSGF declined comments to PREMIUM TIMES on the matter. Calls and texts messages to Bolaji Adebiyi, the department’s spokesperson, were neither acknowledged nor responded to Thursday night.

If the bizarre impasse lingered, the academic will not take part in the swearing-in ceremony for the candidates who have so far received their appointment letter, Oluwole Osaze-Uzzi, a spokesperson for the Independent National Electoral Commission, told PREMIUM TIMES.

Mr. Osaze-Uzzi said the event had been planned for next week Wednesday, but emphasised that only those who bear their respective appointment letters from the OSGF will take the oath of office.

Chris Ngwodo, a public affairs analyst, said the action of the SFG could threaten the integrity of electoral process, at a time INEC should be intensifying activities ahead of 2019 elections.

“This development could put the entire electoral process in jeopardy,” Mr. Ngwodo said.

“INEC is already behind schedule in terms of logistics, finances and other crucial plans that must be put in place going into a tedious process like what we’re going to have in 2019,” he added, noting that INEC Chairman Mahmud Yakubu had recently decried these shortcomings.

Mr. Ngwodo said the delay would inevitably cut into the time frame required for new appointees like Ms. Maikudi to settle down in office, thereby making it difficult for her to get familiar with the peculiarities of the state she would be posted to.

“This SGF’s office is clearly tampering with electoral process by preventing an individual who had been duly cleared by the Senate from resuming work to put new solutions in place ahead of the elections,” he added.

Mr. Ngwodo urged the Senate to intervene in the matter.

“I think it’s time for Senate to show interest in this matter and resist this clear attempt to compromise electoral process.”

Engaging With D.O. Fagunwa’s ‘Writing Into Being’ of the Terrifying Wild

What Buhari expects from the Nigerian media — Presidency