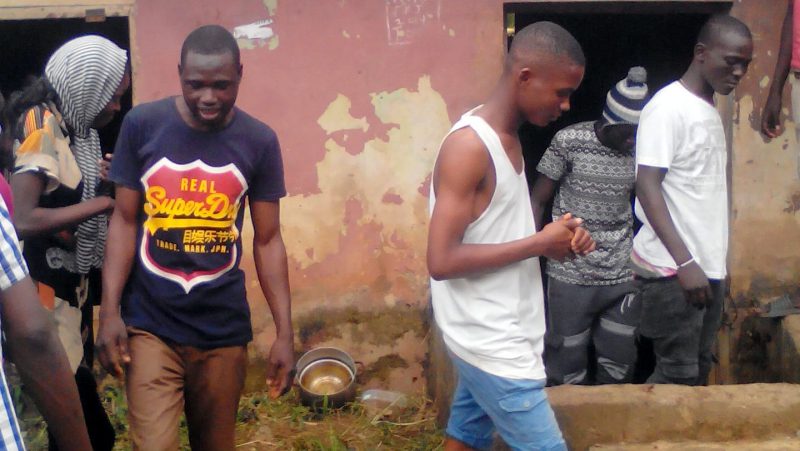 Residents of Obadeyi at the Ijaiye-Ojokoro axis of the Lagos-Abeokuta Expressway on Tuesday called on security operatives to conduct a ‘thorough search’ on a building allegedly used by kidnappers in the area.

Some of the residents spoke to PREMIUM TIMES Tuesday when an alleged kidnappers’ den was uncovered in a tunnel around the bridge on that part of the expressway.

PREMIUM TIMES had exclusively reported the mayhem which led to the death of two suspects who were set ablaze by an irate mob.

Although Police Commissioner, Fatai Owoseni, said on Tuesday that seven people have been arrested by the police, only three individuals were arrested at the scene of the incident which PREMIUM TIMES monitored from morning till dusk.

THE TRAGEDY
‎
Tragedy struck in the early hours of Tuesday when a street sweeper allegedly overheard the voice of a woman and her child crying for help inside the tunnel.

The development prompted local security operatives and residents to plunge into the tunnel and allegedly found the first suspect who was beaten and immediately set ablaze.

The presence of security operatives and fire fighters, however, deterred the residents and the fire was put off. But the suspect was not evacuated as he rolled on the floor, and declined to make any confession.

PREMIUM TIMES correspondent at the scene reports that many witnesses alleged that the suspect later said he would not confess because he could not be killed, a statement that infuriated the mob who finally set him ablaze for the second time and got him killed.

“He bragged that he cannot die. Many of us used several objects on him and he didn’t die. He swallowed a gourd and said he won’t confess. We just had to do the needful,” a member of the mob who declined to be identified told PREMIUM TIMES.

Two others allegedly arrested from the den were, however, lucky as they were rescued by security officials on ground. One of them was caught after he allegedly burst out of an exit around Zenith Bank premises. He allegedly confessed that that were about 25 more suspects underneath the tunnel. The other rescued suspect, who was wearing African wax material, popularly called Ankara, was allegedly found with charms and a calabash.

The third ‘suspect’ arrested was a man believed to be mentally unstable who hung around the neighbourhood. But residents took him to security operatives, saying he might be kidnappers’ ‘informant’.

However, the atmosphere became tense when another suspect was caught after he allegedly ran out of the tunnel. Police and other security operatives were overpowered by the mob who declined to have him rescued like the other two, saying the police may compromise the matter.

He was eventually dragged to the spot where the first suspect was burnt to death and set ablaze by the jubilant mob.

Meanwhile, windows and louvres of a building located on Ajasa Close, off the Lagos-Abeokuta expressway, were vandalised by the mob who alleged that owners of the building were abbeting crime.

The mob later stormed the building with the intent of vandalising valuable items. Residents of the building later emerged to plead with the mob and the police prevented an attack on the residents.

“This building is a ‘suspect’, the tunnel connects to this place and they might know about it,” Ajayi, one of the angry crowd members told PREMIUM TIMES.

“Owners of this building are not completely innocent. How would they not know about the materials found here. They must be probed by security officials,” another resident told our correspondent in Yoruba.

Meanwhile, another resident, Jide Obadina, called on the government to conduct thorough search around the tunnel.

“Government has the master plan of this tunnel. Let them come around to search it.”

“The vigilante people found several holes inside. They even said they heard sound of a generator and voices of people,” Joju Kareem, a resident of the area, said.

But PREMIUM TIMES can authoritatively report that when the search of the tunnel was conducted by soldiers and local vigilante groups, no victim was found underneath.