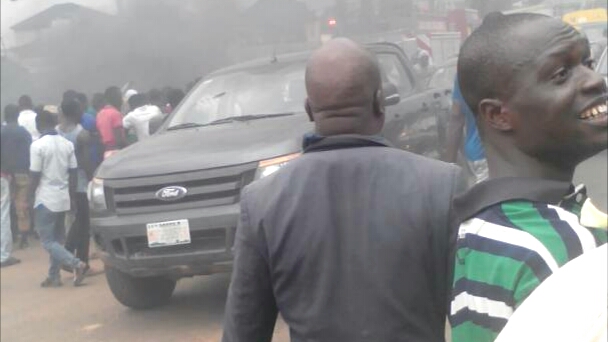 Officials of the Lagos Rapid Response Squad, RRS, have arrived the scene where four suspected kidnappers were caught and two of them burnt alive.

The officials are being shown the various exits around the tunnel by some of the youth and residents of the area.

The RRS officials are led by the Commander, RRS, Lagos state, Tunji Disu.

Earlier, a group of volunteers believed to be of the local vigilante group had plunged into the tunnel after the soldiers exited without trace of the alleged victim.

Mr. Disu said that the police would comb the underground tunnel with dogs and other experts.

He said this while addressing journalists at the scene of the incidence.

He appealed to residents to be calm and cooperate with the police and other security operatives, adding that two police officers had been injured.

Similarly, he disclosed that three suspects had been arrested so far and would be interrogated.

Read our earlier story below:

Another kidnap suspect in the ongoing saga at Ojokoro has been set ablaze.

The atmosphere is tense as police and other security operatives have been overpowered.

A new suspect who allegedly ran out the hole has been set on fire as police couldn’t contain the mob.

Earlier, two other suspects had been caught and whisked away by police officials.

The search is still ongoing and atmosphere tense.

The first suspect had been finally killed after he was set ablaze.

Another kidnap suspect has been found while security officials search for a kidnap victim in Ojokoro, along the Lagos-Ibadan Expressway.

The latest suspect allegedly ran out of the other end of the hole being searched by security operatives including soldiers. He was subsequently caught by the mob.

The mob was bent on setting him ablaze too, but he was rescued by soldiers who took him away.

Soldiers are trying to control the mob while the pandemonium persists.

There is heavy traffic as vehicular movement on both sides of the highway has been slowed down by the heavy crowd.

The first suspect who was burnt by the mob is yet to be evacuated.

Search is still on for the victim, whose cry for help witnesses said they heard.

The alleged kidnapper who was arrested on Tuesday morning has been burnt alive by an angry mob.

PREMIUM TIMES reported the pandemonium caused by the arrest of the kidnapper after passers-by said they heard a cry for help by a female victim.

Officials of the Nigerian Army have arrived the scene and made efforts to control the mob.

Fire fighters have also arrived to control the fire, while pandemonium still pervades the area.

Search for the suspected victim is still ongoing as some soldiers and other security operatives plunge into the dark passageway underneath the Lagos-Abeokuta expressway.

Read our first story below:

There is pandemonium at Obadeyi bus-stop, Ojokoro axis of the Lagos-Abeokuta expressway, as an alleged ritualist was apprehended by residents in the area.

PREMIUM TIMES gathered that the suspect was caught when passers-by overheard the voice of a woman allegedly kidnapped by the suspect and his accomplices.

Police officers at the scene could not control the crowd who are bent on lynching the suspect.

A witness, Adesola John, said passers-by overheard the voice of the allegedly kidnapped woman and began to comb the bridge on the expressway where the suspect was found.

“A woman was crying for help and people heard her voice and searched under the bridge before they found this man,” he said.

“The woman has not been found and, as you can see, we are still searching.”

Another witness who pleaded anonymity said there may be many victims trapped underneath.

PREMIUM TIMES correspondent at the scene reports that search was ongoing at the time of this report.