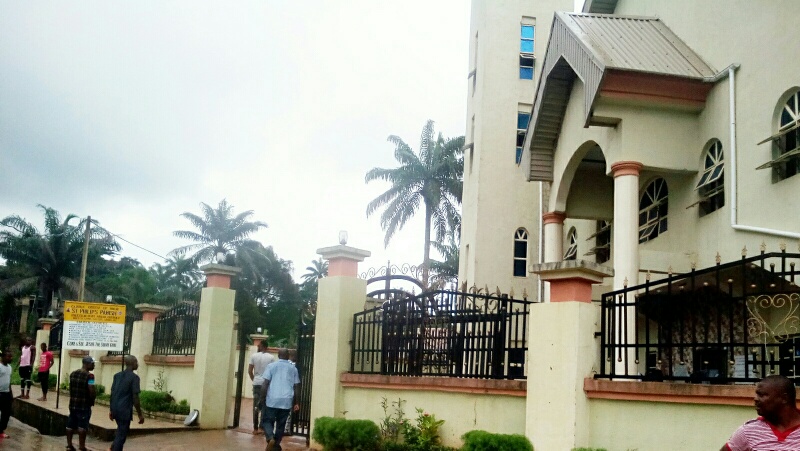 Governor Willie Obiano of Anambra has vowed not to rest until the perpetrators of Sunday’s killings at St. Philip’s Catholic Church, Ozubulu, near Nnewi, which claimed at least eight lives and injured 18 persons are brought to justice.

Mr. Obiano made the vow when he visited the scene of the killings in company of the Commissioner of Police in the state, Garba Umar.

The governor expressed grief over the death of the worshippers, describing the attack as “barbaric, sacrilegious and totally unacceptable”, while also debunking speculations of possible invasion.

According to him, intelligence report linked the shooting to an existing feud existing between some members of Umuezekwe Ofufe Amakwa community of Ozubulu living abroad.

“It is an isolated case and I urge worshippers in the Church and residents of the area to go about their normal activities.”

Mr. Obiano assured the community that his administration was on top of the situation and later visited the injured persons receiving treatment at the Nnamdi Azikiwe University Teaching Hospital, NAUTH, Nnewi.

He promised that the state government would pay the hospital bills of the victims.

He also said that 50 doctors had been mobilised to the hospital to assist in providing the best medical care to the injured persons.

The News Agency of Nigeria reports that the governor also visited Our Lady of Assumption Catholic Cathedral, Nnewi, where he addressed a congregation of worshippers.

He intimated the worshippers on the true picture of the incident, saying there was nothing to worry about.

Earlier, the Parish Priest of St. Philip’s Catholic Church, Jude Onwuaso, said that the attack took place at about 6.30 a.m. during a Holy Mass celebration.

According to the priest, an unidentified man came into the Church, shot at a man, Akunwafor Ikegwuonwu, before shooting sporadically at other worshippers.

A witness, who simply identified herself as a choir member, said that the church was dark as there was no light.

She said that the generating set suddenly developed fault; so, the mass proceeded with the congregation using candles.

According to her, the gunman, after the shooting, immediately jumped into a waiting car with a driver.

The Police Commissioner had earlier confirmed eight people dead and 18 others injured in the attack.

The attack has left the community in state of shock and mourning.

Some residents and people of Anambra have since condemned the killing.

The residents, in separate interviews with NAN in Awka, described the attack as “heinous, unjustifiable and totally unwarranted”.

Osita Chidoka, a former Minister of Aviation, said he was saddened by the incident.

Mr. Chidoka decried the desecration of the temple of God, adding that nobody attacked anyone in the church even during war times.

“This is tragic; the church is a place of refuge to anyone who runs into it, and this wicked, barbaric and mindless bloodletting, shows that something has gone wrong on our psyche.

“My heart goes to the bereaved at this moment of pain. I pray that God grants the soul of the departed eternal rest as I urge the security agents to fish out the perpetrators and make them face the law,” he said.

On his part, Oseloka Obaze, a former Secretary to Anambra Government, said such callous attacks dehumanised the society.

‘’Such violent incidents dehumanise our society.”

In his reaction, Victor Oye, the National Chairman, All Progressives Grand Alliance, APGA, said that no amount of provocation could justify the killing of innocent people who had gone to worship in a Church.

Mr. Oye, who described the attack as wicked, urged the security agencies to unravel those responsible for the dastardly act.

“As a political leader, I totally condemn the Ozubulu Church shooting as dastardly, unjustifiable and callous.

“Nobody has the right to kill innocent citizens. The Police and other relevant security agencies should ensure that the perpetrators of this crime are caught and made to face justice,” he said.

Jude Emecheta, who hails from Ozubulu, told NAN that “a dark cloud has befallen my peaceful town”.

Mr. Emecheta, who is the Managing Director of Anambra Signage and Advertisement Agency, ANSAA, said that the losses from the attack were too much for the people to bear.

He wondered why brothers could visit such attack on their people and urged those involved to “sheathe their swords”.

JAMB to determine cut off mark for admission August 22