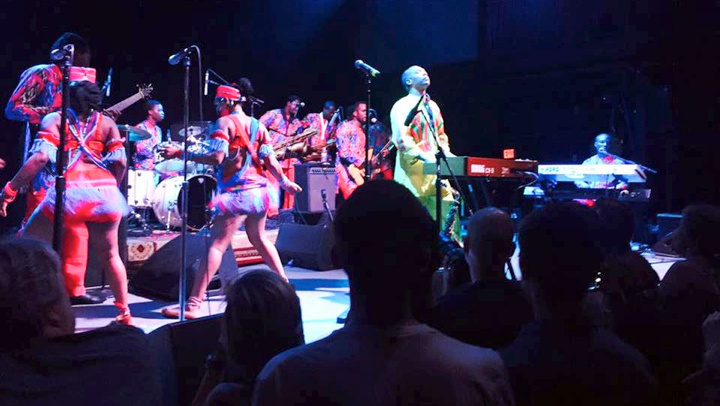 File photo of the Nigerian musician Femi Kuti, right, with The Positive Force band, at the 9:30 Club in Washington DC on Friday, performing on a United States tour.

The Nigerian government’s announcement of a tax break for the creative industry has begun generating reactions from stakeholders.

In a statement issued in Abuja on Thursday, the Minister of Information and Culture, Lai Mohammed, said the decision to grant the industry ‘Pioneer Status’ is in fulfilment of the promise made by the Acting President, Yemi Osinbajo, represented by the Minister of Finance, Kemi Adeosun, at the opening of the Creative Industry Financing Conference in Lagos 17-18 July 2017.

The reactions have come from stakeholders who understand what the tax break entails.

For instance, when this newspaper contacted a singer, 9ice, and an official of Mavin Records, they refused to comment on the development because they did not understand what was meant by the tax break.

Veteran singer and actor, Segun Arinze, also admitted to hearing about the announcement for the first time and added that it was long overdue.

He said, “It is a welcome development which will help boost the industry. As practitioners, we must see to it that we use the waiver to build on infrastructure and develop the industry in terms of equipment; training and we also need to build a lot of cinema houses.

The 51-year-old actor also lamented the dearth of cinema houses in Nigeria.

“It is also sad that as big as Nigeria is and despite the hullabaloo about Nollywood, we only have 30 cinema houses, it doesn’t make any sense.  South Africa makes little or no noise despite having over 500 cinema houses. We call ourselves giants yet we only have 30 cinema houses. If we are going to celebrate the tax relief, we must involve the government and corporate bodies to build community theatres. We must see to it that we use that tax break effectively so that by the time it elapses, we will be prepared ahead to begin to pay out tax effortlessly,” he noted.

On his part, the President of the Save Nigeria Movie Industry Campaign NGO, Yomi Fabiyi, called on the minister to ensure the quick passage of the proposed Mopicon bill. According to him, it will ensure that movie professionals practice under one umbrella irrespective of the association they belong.

He said, “The industry lacks structure and that is the viable edifice all these lofty ideas can seat and be resourceful.

It is a welcome development for the Federal Government to grant us “Pioneer Status” on tax. I humbly appeal to private investors to quickly tap into this and pump in funds to enhance speedy growth of the industry. In the movies in particular, it will help investors make funds available so that movies of cinema standard can be shot and we have the cinema culture returns and expansion in distribution.

“If they heed to our advice, sponsors can have a guarantee and useful return of their investment. This will mean they can engage more people to render related services in the field. A reasonable profit margin is also certain unlike the earlier profit margin they can hardly turn over. This will equally attract tourism and enhance the sustenance of the movie industry, which is presently on life support machine owing to strangulating vices such as epileptic distribution, piracy and sub-standard practices.”

When this newspaper reached out to Seun Apara, a renowned publicist of top Nigerian entertainers, he admitted that many entertainers are ignorant of what the tax break entails.

He noted, “Many Nigerian entertainers are evading tax, not because some of them intentionally want to, but because they don’t understand their taxable income. A good understanding of taxation of the entertainment and creative industry will help entertainment practitioners spot unique issues before they become problems, interpret rules and regulations correctly, make business decisions that lower taxes, and ensure compliance with the law.”

Back in July, it was widely reported that the Nigerian government was planning to jail Nigerian celebrities for, as much as five years should they be caught evading tax.

The federal government made this known following the launch of Voluntary Asset and Income Declaration Scheme, which provides for a grace period of nine months for entertainers to pay up what they owe in taxes.

The new tax break does not cover personal income tax or property tax for individuals.

The federal government was also reported to have reviewed land ownership, ownership of exotic cars, yachts, private jets and other luxurious properties in its new policy to help it better estimate the earnings of the affected persons in order to best calculate their taxes.

According to the report, there were celebrities with houses in exotic locations worth millions of naira, and a tax record not consistent with the value of the property. The government advised that such celebrities “complete form VA1” and clarify sources of income for the house and pay necessary taxes within July 1, 2017 and March 31, 2018.

Shedding light on the decision to grant the creative industry pioneer status, Mr. Mohammed said the development is a shot in the arm for the Creative Industry as it is also the answer to the quest to spur the establishment of world-class studios in Nigeria for production and post-production of movies and music videos.