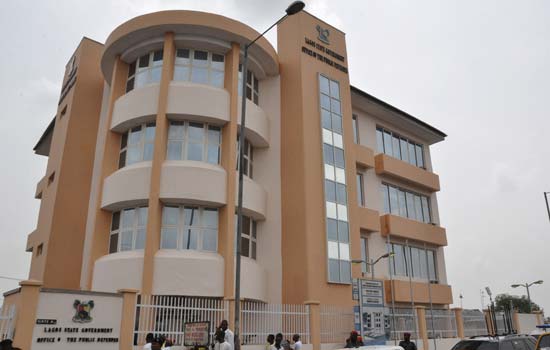 The Lagos State Government on Friday arraigned the owner of Vintage Hotel in Owode Onirin area of Ikorodu, Patrick Okeechobee, before a Yaba Magistrate Court for allegedly aiding and promoting homosexual activities and gay club in his hotel.

Mr. Okeze was arraigned alongside two of his workers, Sunday Isang and Bright Oba, for allegedly encouraging the act to be perpetrated by young men and minors in the hotel contrary to the provisions of Same Sex Marriage (Prohibition) Act of 2014.

The state government had on Thursday arraigned 28 adults and 12 minors before Yaba and Ebute-Metta Magistrate Courts respectively for engaging in homosexuality using the said hotel.

Specifically, Mr. Okeze and his workers were said to have aided 40 people and others still at large, to engage in same sex activities as well as gay club/party in the said Vintage Hotel located at No 999, Ikorodu Road/Toyin Close, Weigh Bridge, Owode Onirin, Lagos contrary to and punishable under Section 5 (2) of the Same Sex Marriage (Prohibition) Act, 2014.

After the one-count criminal charge against Messrs Okeze (56), Isang (30) and Oba (28) was called and read before Chief Magistrate Adewale Ojo, the defendants were not allowed to take their plea as they argued that the court lacked the jurisdiction to adjudicate on the subject matter of the case.

The prosecution team including Adetutu Oshinusi, Bosun Aroyehun, Folabi Sholebo, Olaitan Shoetan and Nnena Okereka, all from the State’s Directorate of Public Prosecution (DPP), urged the court to remand the defendants in prison pending the outcome of the legal advice of the DPP.

But the defence team led by Alli Abba urged the court to discountenance the application of the prosecution, and admit the defendants to bail, as the offence under which they were charged, is bailable.

He referred to the arraignment of the principal suspects in the case who were granted bail by the same court on Thursday, assuring that his clients would not abscond if admitted to bail.

But in response, police counsel, Effiong Asuquo, said the application for the defendants to be remanded in prison pending legal advice was based on the need to prevent the defendants from going back to run the hotel if granted bail.

He said the subject matter of the case being about Same Sex Marriage Act could only be tried at the High Court, and that the application was needed to keep them in custody pending legal advice.

In his ruling, Magistrate Ojo held that in view of the provisions of Section 264 (1) of the Administration of Criminal Justice Law of Lagos State, he found merit in the application for the defendants to be remanded pending the DPP advice.

The court said having examined the affidavit in support of the application for remand, he found “sufficient merit” in it, and ruled that “the 1st, 2nd and 3rddefendants be remanded in prison custody pending their legal advice.”

The magistrate also adjourned the matter to September 4, 2017.

Mr. Ojo had, after the arraignment of the 28 adults on Thursday, ordered them to undergo health screening by the Lagos State Aids Control Agency, LSACA, and sexual rehabilitation by the Lagos State Domestic and Sexual Violence Response Team (DSVRT).

Responding to the arraignment, the State’s Attorney General and Commissioner for Justice, Adeniji Kazeem, said the development was an eloquent testimony to the commitment of the Governor Akinwunmi Ambode-led administration to fight all forms of ‘crime and criminality.’

“The arraignment is a confirmation of the commitment of the Lagos State Government to ensure that every resident abides by the law of the state and also to put a stop to the exploitation of under-aged children who are often lured by unscrupulous and criminally-minded adults to engage in acts or behaviours that are not in consonance with the laws of the State,” Mr. Kazeem said.

He also reiterated the commitment of the state government to do everything humanly possible to uphold the Child Rights Protection Laws of the State.

Clara Ibirogba, the Alternate Chair at DSVRT, who was at the arraignment, pledged to work with other relevant agencies of the state government to ensure proper rehabilitation of the suspects in line with their bail condition.

On his part, Michael Essien of LSACA also promised that the minors would be given proper counselling and necessary medical screening to determine the state of their well-being.