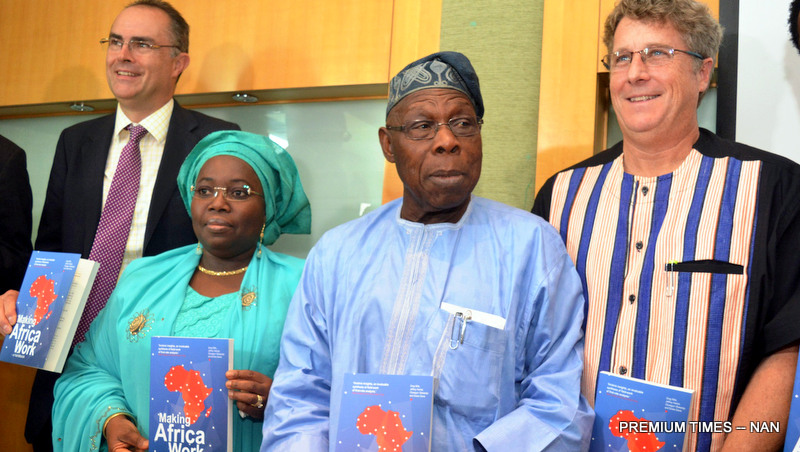 Mr. Obasanjo made this revelation at the launch of a book titled, “Making Africa Work”, co-authored by the former president and three other authors.

The book, which was unveiled in Victoria Island, Lagos on Wednesday, was co-authored by other writers including Greg Mills, Director of Brenthurst Foundation; Jeffrey Herbst, President of NEWSEUM and Dickie Davis, a retired major general.

The former president said the real problem bedevilling Nigeria and the African continent is not the shortage of policies and economic roadmaps, but what he called ‘leadership problem.’

“We are not short of policies; In fact, go to any government office or some international organisations, you’d find hundreds of policies and recommendations,” Mr. Obasanjo said.

“So what is the problem? I’d say three major things and if you like the three major problems confluence in one: Leadership, Continuity, and Finance.”

Mr. Obasanjo was succeeded as Nigeria’s president by Mr. Yar’Adua, who rode to victory in the 2007 presidential elections on the platform of the then ruling People’s Democratic Party, PDP, a party to which Mr. Obasanjo belonged.

But the former president said the then incoming government jettisoned the reforms put in place by his government.

“Let me give specific example here in Nigeria. We came up with something we called NEEDS – National Economic Empowerment and Development Strategy; and we had national, state and local,” he said.

“The idea is that we will have what will relief us in every aspect – political, social, infrastructural etc. And each state will have something they can buy and bite into. When we were planning, we went round the country and we bring traditional rulers, private sector, everybody. Even, we brought in the (then) incoming administration – we consulted with them.

“And we had had the first phase of NEEDS which was supposed to be a continuation (but) the administration that succeeded our administration which campaigned on the basis of continuity came and discontinued.”

The former president, who was instrumental in the emergence of Mr. Yar’Adua as the nation’s president, said the then ‘leadership’, whom he refused to name, never understood the reforms.

He said, “And without being immodest, the leadership just didn’t understand what it takes and what it should take.

“When the leader was going to make his first statement on energy for instance, he said in four years, they will generate 30,000 megawatts of electricity. That time the highest we generated was 4,000.

“In four years, how will they do it?” he asked, rhetorically.

“So it means that he didn’t know; he just didn’t even understand. So, I sent somebody, I said ‘look, go and educate him’. And he went but what happened? We had a process to be able to generate 10, 000 (megawatts), the administration that succeeded us did not even generate 3,750 (megawatts) that we were able to generate in four years. They came down to 1,500.

“And the one that we had in the pipeline, they stopped it. And that was ten years ago. Up till today, our power generation has not gone beyond where I left it ten years ago.”

The former president explained further that leadership and continuity remained the bane of Nigeria’s -and indeed Africa’s – progress, saying the leadership must define its priorities properly.

“So that simply is the problem – leadership to understand, to do the right reform…to show integrity and to make the right choices…and, of course, continuity.”

Mr. Obasanjo has always been known to be vocal in criticisms of policies of his predecessors, a trait that has not endeared him to a section of the political class.

In December 2013, he, in an acerbic attack, accused immediate former President Goodluck Jonathan of lying, promoting corruption and ‘destroying Nigeria.