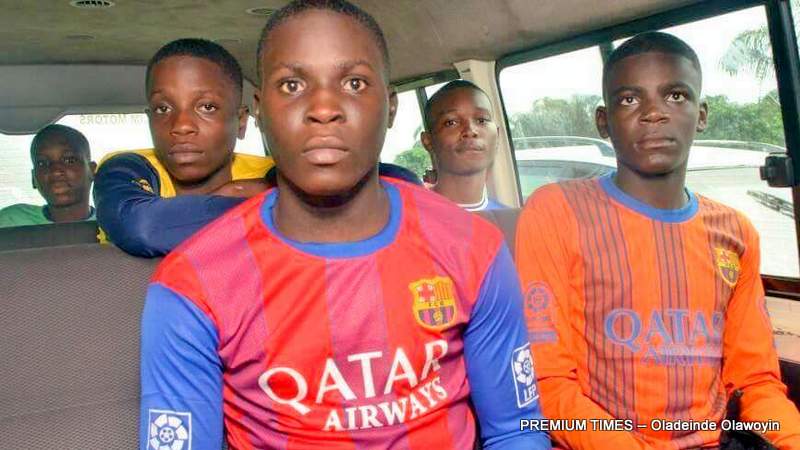 The released students in Akure on Friday

Fresh facts have emerged on how the release of the six Igbonla Model College students was secured on Friday at Ajamkpa in Ese-Odo Local Government of Ondo State.

PREMIUM TIMES gathered that the governments of Ondo, Ogun, Delta and Lagos states began negotiations with the kidnappers 10 days ago when information came out that the students were kept at the creeks in the riverine communities of Ondo State.

The students, Peter Jonah, Isiaq Rahmon, Adebayo George, Judah Agbausi, Pelumi Philips and Farouq Yusuf, were kidnapped from their state-owned school on May 25.

The Ondo State Deputy Governor, Agboola Ajayi, who is also from the area, was said to have led the negotiations with the militants, on behalf of the Lagos State Government.

“I know the Ondo State Deputy Governor, Mr. Agboola Ajayi who is from the waterside area met with some leaders in the area and a negotiation was made,” a source at the Ondo State Government House, said.

He said Mr. Agboola made several contacts with the militants before they were released on Friday at Ajamkpa community.

The source said the Ondo State Government also relied on the cooperation of the Nigerian Navy and the Joint Military Task Force to secure the release of the children.

“The release of the six students followed the intervention of the government of the Ondo State after days of pressure and negotiations,” the source said.

“Prominent people tried all they could to intervene.

“The Delta State deputy governor was even in the creeks personally to ensure the negotiations, but without success.

“All of a sudden, I think the kidnappers changed their minds and released the students to the Ondo State Government alone after some talks.

“Eventually, the students were released by their abductors and the Navy and the marine police were contacted to transport the students outside the creeks.

“Some of the students told us that they had been living comfortably with their abductors in the last 64 days. One of them said they were being fed with bread and sardines while they also sleep comfortably” the source explained.”

The Chief Press Secretary to Mr. Agboola, Leke Akeredolu, confirmed that his principal led the negotiations with the kidnappers.

He, however, failed to give further details on how the kids were rescued.

PREMIUM TIMES further learnt that the students are already on their way to Lagos to be reunited with their parents.

A mother of one of the kidnapped students earlier confirmed the release to PREMIUM TIMES.

“They have been released. The deputy governor of Ondo state called me and I spoke with my son,” she said.

Meanwhile, the Lagos State Government on Friday expressed excitement over the release of the students.

In a press statement, the State’s Commissioner for Information and Strategy, Steve Ayorinde, congratulated the parents of the students and all concerned stakeholders over the development, just as he said the students would undergo series of medical tests and trauma therapy before they are reunited with their families.

“This is a welcome development and the state government has always believed that the students would be released unhurt. The news of their release is, therefore, a confirmation of that belief and we are glad that they would be reuniting with their families,” Mr. Ayorinde said.

The commissioner said the state government remained resolute in its commitment to ensure the safety of lives and property of residents in the state and has already beefed up security in schools to prevent a re-occurrence.

Reacting to the release of the students, the Safe Schools and Communities Advocacy Group while congratulating the parents and Lagosians noted that they were “released, not rescued.’’

“This means that for all of the 64 days, the police and security agencies did little or nothing,” said Hassan Soweto, the group’s coordinator.

“It also means that in the given situation, parents of the victims, who are majorly civil servants and self-employed people, were left with no option but to sell their properties in order to raise the ransom money.

“This situation, of course, means that all of the critical questions we raised in the course of the kidnap are very relevant and must be addressed in the wake of the kidnapped children otherwise it is only a matter of time before another kidnap case occurs.”

The group has been vocal in its condemnation of the handling of the abduction by the Lagos State government.