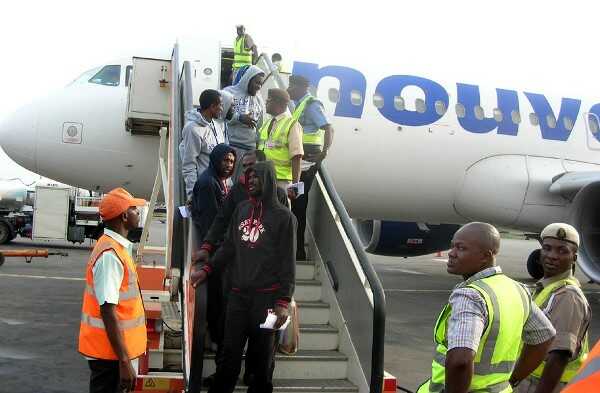 FILE PHOTO: Some of the 171 Nigerians who voluntarily returned from Libya before they disembarked form their aircraft on arrival at the Murtala Muhammed International Airport, Ikeja. {Photo; NAN]

The Federal Government on Saturday received no fewer than 198 Nigerians illegally residing in Saudi Arabia at the Aminu Kano International Airport, Kano, at about 10 a.m.

The News Agency of Nigeria (NAN) reports that this number was out of the 1,800 Nigerians living illegally in Saudi Arabia, who were given amnesty to return to the country.

NAN reports that the 198 persons including women and children returned with their luggage on board a Med-View aircraft.

Officials of the National Emergency Management Agency (NEMA) in Kano received the first batch of the returnees.

Mohammed Yahaya-Sani, the Consular at the Nigerian Consulate in Jedda, Saudi Arabia, who led the illegal immigrants to Nigeria, told journalists at the airport that the Federal Government sponsored their return.

According to him, the illegal migrants voluntarily reported to the Nigerian Embassy to be returned to Nigeria in compliance with the three months evacuation notice issued to them by Saudi authorities, which will expire on July 24.

Mr. Yahaya-Sani said contrary to speculations, the returnees were not deported, rather they voluntarily accepted the amnesty offer granted them by the Saudi authorities for illegal immigrants to leave the country.

“They decided on their own to return to Nigeria. The Saudi authorities offered amnesty to all illegal immigrants to leave the country within three months,” he said.

The official handed over the returnees to NEMA officials at the airport who witnessed and documented their returns before they later departed to their various towns and villages. (NAN)