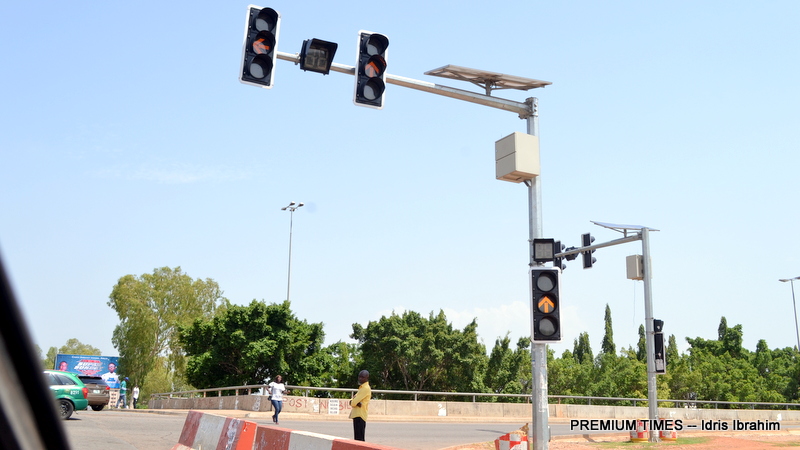 One of the traffic lights

An increasing number of nonfunctional traffic lights are frustrating traffic management in Abuja, traffic wardens and motorists have told PREMIUM TIMES in a bouquet of complaints on the chaos and carnage on the roads of the nation’s capital.

They said the situation is responsible for gridlocks and car crashes at strategic junctions across the metropolis of the territory.

An investigation by this newspaper shows that most of the traffic light installations along Adetokunbo Ademola and Aminu Kano Crescent in Wuse II are not working.

It is the same situation in other parts of the metropolis, including the Central Business District, Ministry of Finance Junction, Coscharis Junction, Defence Headquarters Junction, Area 11 Junction and Gimbia Street where most of the installations have either been vandalised or not functioning properly.

A motorist who identified himself simply as Mike said he drives between Gwarinpa and Wuse on daily basis. He told PREMIUM TIMES that nonfunctional traffic lights at major junctions were responsible for most of the accidents he had witnessed and the traffic gridlock on most days.

He said the electrical installations were more efficient than traffic wardens in traffic management because of the human factor.

“Most of us don’t tend to obey traffic wardens because sometimes they tend to be biased.

“During rush hours, particularly at the close of work, traffic wardens find it difficult to control vehicles. Most motorists drive at their discretion and that’s why you always see accidents at major junctions in Abuja”.

We are doing our duty but…- Traffic wardens.

A traffic officer told PREMIUM TIMES that he witnessed about five accidents daily. He said most of the crashes could have been avoided if the traffic lights were working.

“The light (pole) is taller than a human being, so if you are coming from afar, you would see the light, unlike the human being. Some of them (motorists) will complain that ‘Oga, I no know say you dey, I no see you’, after they hit the other vehicle you have passed.

A warden who spoke at his duty post at Banex Junction, a point linking two major streets, Aminu Kano Crescent and Ahmadu Bello Way in Wuse II, said the authorities have long ceased to carry out repairs on traffic lights across the city.

“The number one reason the traffic light is not working is that of lack of government care, the government does not care,” he said.

The officer who did not want his name in print said it was about two years ago that he last noticed officials of the agency responsible for maintaining traffic lights.

“I don’t want to say last year because we did not see them last year. Sometimes they will come and open the boxes and look, we all thought that they wanted to fix the light but at the end, they will go. The FCDA (Federal Capital Development Authority) are the people that used to come to open the boxes because I went to ask them and they said they are in charge of traffic lights,” he said.

According to the 2006 census, the city of Abuja had a population of 776,298, making it one of the ten most populous cities in Nigeria.

By 2015, the city was experiencing an annual growth rate of at least 35 percent.

A closer look at the city reveals a capital city plunged into new depths by its deteriorating infrastructure, an ever-increasing population and neglect by the government.

But the authorities denied that they have abandoned maintenance of the facilities.

Speaking to PREMIUM TIMES, Vincent Igberaese, Director, Traffic Management at FCDA, said the government was putting efforts to ensure that all infrastructure in Abuja are working, including the traffic lights.

“A lot of money is being spent on it on a daily basis, monthly basis to make sure that everything is working perfectly,” said the director.

“These ones that you have seen that are not working, it is not that they are not maintained. We have a unit; their sole responsibility is to maintain traffic lights. Every junction that has traffic light is supposed to be working, they go round the junctions to make sure and also check what and what are the problems and they go ahead to maintain it.

“The problem we are having that you are saying the majority of them are not working is due to vandalization. I don’t know why. I don’t know what people are seeing, or the gain in vandalising government property. These are things that are helping everybody because if you are a driver, you know the usefulness of traffic light.”

The director told PREMIUM TIMES that the agency stopped using contractors to maintain traffic lights in Abuja because they found it more cost effective to do the work with civil servants.

“Before now, we were using contractors but we discovered that the government was spending too much on little things. So, we now came back and said this is something we can do. So, the Transport Secretariat now decided to set up a maintenance team which is now maintaining the traffic light with a little amount.”

Mr. Igberaese expressed suspicion of sabotage in the high number of traffic lights not functioning in the metropolis.

“I don’t know whether the people who were working with those companies (former contractors) are the ones sabotaging our effort because they are no longer getting the job since they are not getting the money they are supposed to get.

“Everybody knows that there is no money in the country, so we have no money to waste. We are doing our best on our own and we are succeeding. We have even started as a department to install traffic lights by ourselves.

“Our aim is that a time will come if we want to use contractors we can use but if we want to install traffic lights ourselves we can.

“There is one we have just installed when you are going to Kado, that new road to Kado, through NEXT. You saw one junction where they now have traffic light where a lot of accidents have occurred. That was not done by contractors; that was done by the in-house team, our maintenance team”.

Mr. Igberaese also pointed at the national problem of inadequate electricity supply. He disclosed that the FCDA has thus decided to source power for all the traffic lights in Abuja from solar.