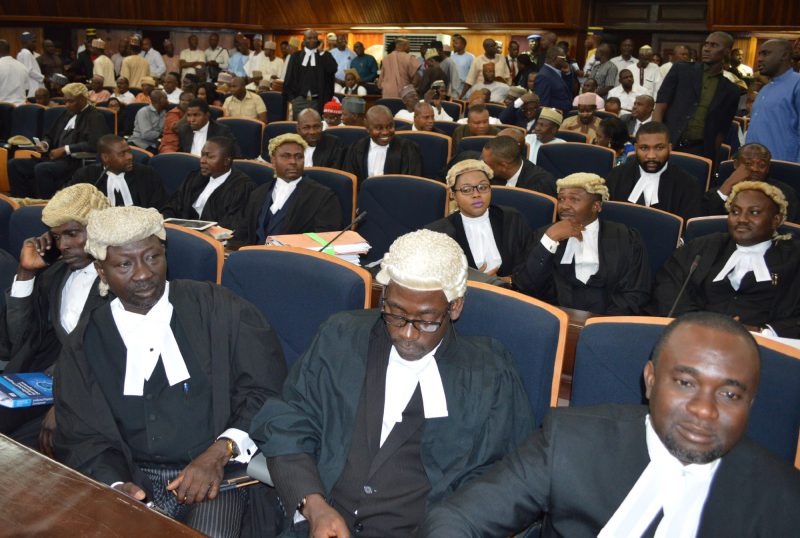 Lawyer at the Supreme Court sitting in Abuja on Wednesday (12/7/17), which sacked the National Chairman of the opposition PDP, Sen. Ali Modu Sheriff and declared Caretaker Committee Chairman of the party, Sen. Ahmed Makarfi as authentic leader of the party. 03464/12/7/2017/Ernest Okorie/BJO/NAN

The Supreme Court on Wednesday upheld the election of a former Kaduna State governor, Ahmed Makarfi, as the authentic chairman of the Peoples Democratic Party, PDP, after a protracted legal battle that ruptured the unity of the party.

A three-member panel of the court presided by the Chief Justice of Nigeria, Walter Onnoghen, upbraided Mr. Makarfi’s contender, Ali Sheriff, for demonstrating “infantile desperation to lead the party.”

Reading out the judgement after weeks of compilation, a member of the panel, Rhodes Vivour, said Mr. Sheriff was not within the category of an ‘unimpeachable leader’, stressing that the removal of the former governor was not necessarily expected to follow a vote of no confidence.

Mr. Vivour added that there was no clause in the constitution of the party that made it mandatory for Mr. Sheriff to be removed’ using a vote of no confidence.

“He demonstrated an infantile desperation to lead the PDP by filing almost 10 different applications in various courts. They shall forever gather dust in judicial archives,” the judge said, referring to the various applications filed by Mr Sheriff regarding the matter over the last few months of intense legal wrangling.

Mr. Vivour cited relevant sections of the PDP constitution which made it imperative for members of the party to respect the proceedings of the PDP national convention.

“The subject matter in the issue is Article 33; 35 and 47,’’ said Mr. Vivour, who then went ahead to state the contents of the aforementioned articles.

The apex court further said that although the PDP constitution allows the party to remove the National leader after two years through a vote of no confidence, the word used to denote Vote of no confidence was ‘may’, which does not signify compulsory adherence.

“May is not the same thing as shall,” therefore “a national officer could be removed without a vote of no confidence.”

The apex court subsequently ordered Mr. Sheriff to pay a fine of N250,000 for abuse of court processes.

The rift between both leaders of the party began with a ruling of a Federal High Court in Lagos on May 17 2016, which resulted in contrasting court judgements which subsequently led to troubled days for the PDP and led to the loss of many members of the former ruling party.

In the said ruling, the Federal High Court, FHC, in Lagos gave an order restraining the PDP from conducting election into some national offices at the National Convention that was to be held in Port Harcourt, Rivers State that month.

But shortly before the date of the said convention on May 21, the PDP received a different judgement from another FHC in Port Harcourt allowing the convention to hold as scheduled.

After the meeting, on May 25, two courts in Lagos and Port Harcourt gave conflicting judgements: one allowing, the other nullifying the proceedings of the meeting.

Then on August 15, Justice Okon Abang of the Federal High Court, Abuja Division, gave an order suspending a planned national convention of the PDP on August 17, after the Port Harcourt branch of the same court gave an order compelling the Independent National Electoral Commission, INEC, and the police to ensure the conduct of the convention.

After months of traversing the trial courts, the Sheriff faction approached the Appeal Court in Port Harcourt to contest a decision of the lower court which on July 4, 2016 affirmed the emergence of Mr. Makarfi as the authentic leader of the PDP during the May 21 convention of the party.

Again, on February 17, the Port-Harcourt Division of the Appeal Court upturned the decision of the lower court and affirmed the appointment of Mr. Sheriff as the authentic leader of the party.

After that judgement, the Makarfi-led faction approached the Supreme Court in what could be regarded as last ditch effort to wrest control of the party from Mr. Sheriff.

The move appears to have paid off.

With the judgement, and perhaps moves to reunite factions, many political pundits are optimistic that the former vibrant party will now be able to offer a robust opposition to the ruling APC.