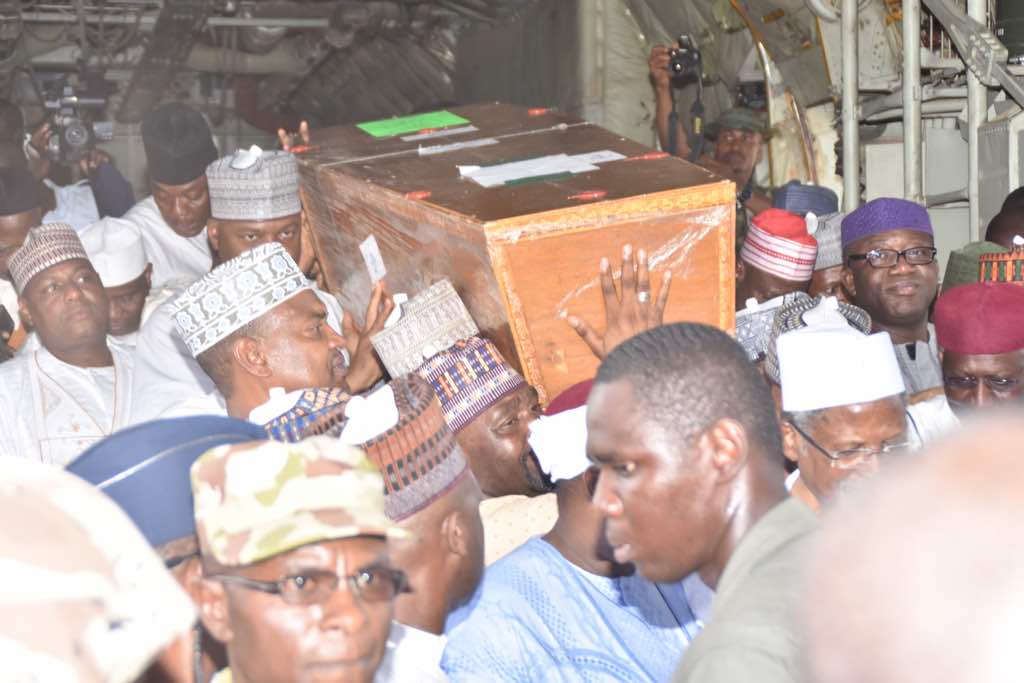 Remains of Mataima Sule being conveyed

As hundreds of dignitaries and other Nigerians gather in Kano for the burial of late Yusuf Maitama Sule, PREMIUM TIMES has learnt that his body will no longer arrive at the Kano international airport.

The presidential jet carrying the remains of the Dan Masini Kano will now land at the Nigeria Air force air strip.

Heavily armed security personnel have since been deployed to the Air Force strip.

Only few dignitaries were allowed access to it while there was heavy restriction of vehicular movement.

About seven governors were already at the air strip, as well as a former NSA, Aliyu Gusau and businessman Aminu Dantata.

The body of late Maitama Sule left Abuja for Kano aboard a presidential jet at about 2.40 p.m.

Officials who accompanied the body include Senate President Bukola Saraki, the Chief of Staff to President Muhammadu Buhari, Abba Kyari, and some ministers.

PREMIUM TIMES reported the arrival of the body earlier on Tuesday from Egypt.

The body was received Tuesday afternoon by the Chief of Staff to the President, Abba Kyari, and the Senate President, Bukola Saraki, who leads the federal government’s delegation to Mr. Sule’s burial.

The plane conveying the body arrived at about 1:54 p.m.

“The Chief and Senate President walked from the presidential wing to Egypt Air at the tarmac to receive the corpse,” a source at the airport said.

Some of the dignitaries already in Kano waiting for the corpse include Ango Abdullahi, governors of Jigawa and Bauchi states, as well as a delegation from Niger Republic.

The Kano State government had on Monday announced that funeral prayers will take place by 4 p.m. on Tuesday at the palace of the Emir of Kano.

5.22pm: Remains of Danmasani convey by Senate President, Govs of Kano, Jigawa and others including Chief of Staff to president Muhammadu Buhari, Abba Kyari

6.40pm: The funeral prayers for Danmasanin Kano led by Chief Imam of Kano State, Sani Zahradeen, with Senate President Bukola Saraki, Governors, Ministers and Chief of Staff to President Buhari, Abba Kyari, in attendance. The prayer was conducted at the Emir’s palace.

Save me from recall, Dino Melaye begs senators