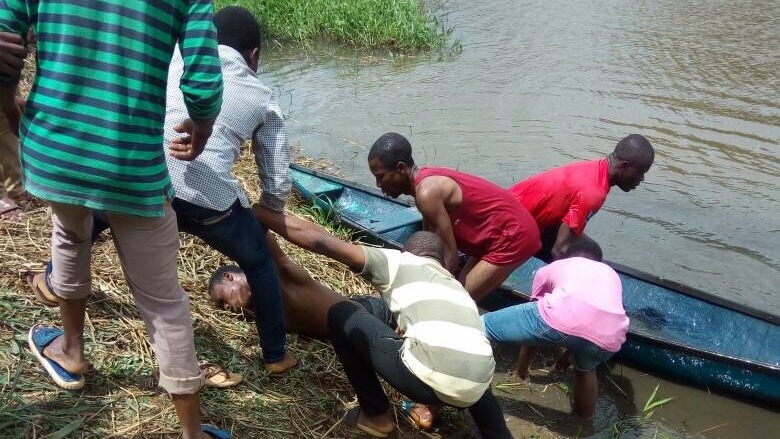 One of the students being removed from the water dead

Two students of the Federal University of Technology, Akure, FUTA, died on Saturday at the institution’s laboratory for fishery and aquaculture, after the canoe they were in capsized.

PREMIUM TIMES gathered that the bodies of the students were retrieved from the lake by officials of the Ondo State Fire Service.

According to a press statement signed by the Public Relations Officer of the FUTA Students Union, Fowowe Ayomide, the students drowned at the place behind the Great Hall, Obakekere.

The statement said the accident occurred after a students’ entrepreneurship training, ENT, at the laboratory for fishery and aquaculture.

“After the training, four of them decided to take a selfie on the canoe packed at the venue, during that process, the canoe which the four of them were in capsized,” Mr. Ayomide said.

“They drowned inside the water, and two of them narrowly escaped because they were able to swim, while the other two found it difficult to swim which led to their death.”

The union urged all students to pay their last respect to their colleagues who lost their lives in the incident, while praying for the repose of the departed.

The FUTA incident occurred a week after a 200-level student of the University of Ilorin drowned at a swimming pool in a popular hotel in Ilorin.

Olaniran Samsudeen of the Arts Education department went to the hotel to swim along with his friends but died in the process.

The latest incident also occurs about two weeks after another student of the Obafemi Awolowo University drowned in a pool.

Nobody has plans to Islamise Nigeria, Onaiyekan tells Christians