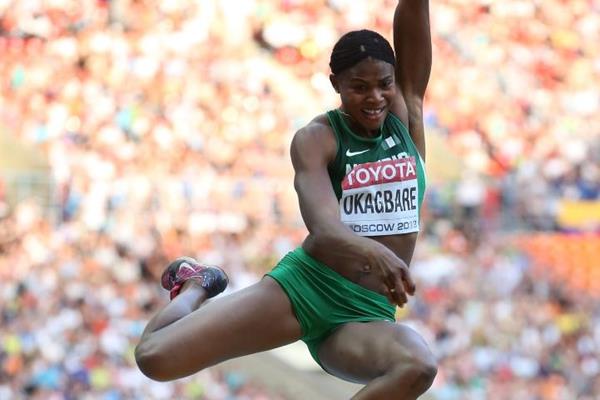 Nigerian queen of the tracks, Blessing Okgabare, finally had a podium finish at the IAAF Diamond League as she finished third in the 100m Women’s event in Paris on Saturday night.

Okagbare ran a season’s best time of 11.09 secs but she could only finish in third place behind Jamaica’s Olympic 100m and 200m champion Elaine Thompson who won the race with a time of 10.91secs.

The Jamaican was pleased with her victory even as she added that she is in top shape for the World Championships in London.

“The result is not bad especially after two false starts,” said Thompson. “But this was a great preparation for the World Championships. Coming straight from the Jamaican Trials, it was important to get back in the blocks. It is different weather in Jamaica! But I am glad for my first time in Paris. In this moment I am exactly where I want to be, feeling good, feeling excited with one month to go to the World Championships.”

Thompson was pushed to the line by Ivory Coast’s Marie-Josee Ta Lou, who finished second in a season’s best of 10.96.

Though the race in Paris was a significant improvement for Okagbare whose previous season’s best time was 11.16secs, the aim of running her first sub 11 seconds race in two years could not be achieved.

Interestingly, it was at the Meeting De Paris two years ago that Okagbare ran 10.80 seconds, her second fastest 100m time ever; but she could not reenact that magic in Saturday’s race.

Away from the women’s race, there was something to cheer for Africa in the men’s 100m event as Ivory Coast’s Ben Youssef Meite won in a season’s best of 9.99 after 41-year-old Kim Collins of St Kitts and Nevis had been disqualified for a false start.

Meanwhile, it was business as usual in the men’s high jump as Mutaz Essa Barshim, who heads this year’s world list with 2.38m, secured victory with a first-time clearance of 2.35m that proved beyond any rival on the night.

What Nigerian youth must do to sustain a just, progressive country – Senator