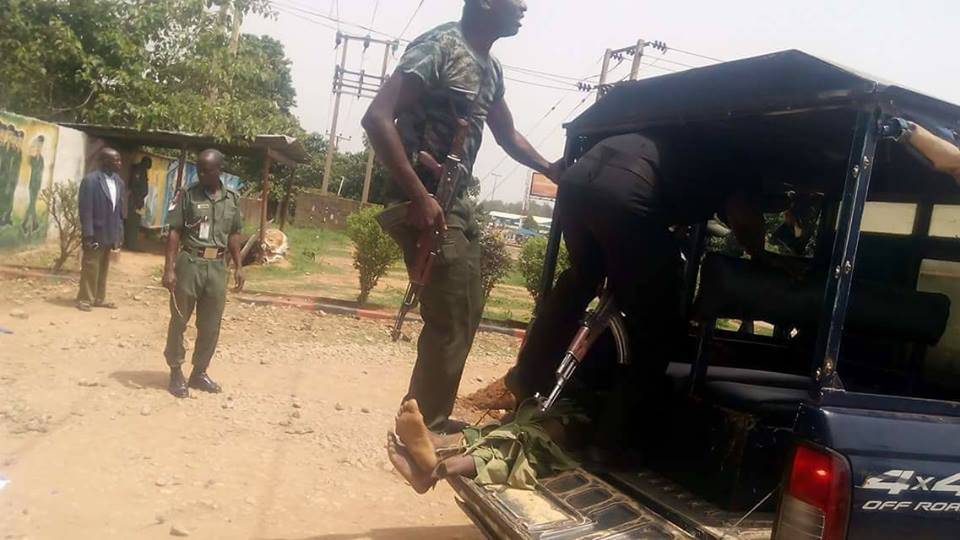 A Nigerian soldier shot and killed a resident of Kaduna on Friday, sparking a deadly protest that resulted in the killing of two demonstrators.

One person was injured in the shooting, resulting in a clash between soldiers and civilians.

The first fatal shooting triggered a protest that resulted in the killing of two other residents around the Command Secondary School Junction, Nnamdi Azikiwe Way, in Kaduna.

The victim, identified by his relations as Solomon Andi, 35, was allegedly shot while packing sand from a gutter between a cemetery and the school building around 9 a.m. on Friday.

“Solomon was packing sand in a gutter in front of the military school when he was asked to stop by the soldier, but he pleaded with him to allow him pack the sand since the gutter is not anyone’s belongings,” John Simon, a witness told PREMIUM TIMES.

Another witness, John Paul, told journalists that two other people who were among protesting youth who attempted to break through the military facility’s main gate were also shot dead by the soldiers with one other person injured.

Samson Andi, the deceased younger brother who spoke to PREMIUM TIMES on phone, gave further details of how he said his brother was killed.

“Solomon, my late brother lived at Baka Street, and had no specific job. He did every menial job ranging from brick layer, carpentry, packing sand and so on to feed his family.

“Solomon was at that area to pack sand inside gutter in between burial ground and command when this soldier who was smoking weed, started harassing him (Solomon) and punishing him with frog jump and then shot him. He died on the way to Saint Gerald Hospital and the body is deposited there,” Mr. Andi said.

“Our mother and I have been at the Television Garrage police post since around 11a.m. to make report. Up till now we don’t know what they (police) are doing.

“My sister also told me that two other people who are among some people who tried to protest my brother’s death were also shot dead and other person was injured.

“We are really in a state of confusion. We appeal to government to take responsibility, arrest those soldiers and bring them to justice,” he added.

Calm has however returned as normal business activities had resumed at the time PREMIUM TIMES visited the area. Police and soldiers were also seen patrolling the area.

The army’s 1 Division Headquarters, Kaduna, said the shooting was by a soldier of the Division Internal Security Force deployed at Command Secondary School Kaduna.

The army, in a statement signed by the Deputy Director, Army Public Relations, 1 Division Nigerian Army, Kingsley Umoh, a colonel, said the matter was being investigated.

He said the General Officer Commanding the division was appealing to law-abiding citizens to remain calm and go about their lawful duties.

The army did not confirm the death of two other youth alleged to have been killed during the protest.

“The attention of Headquarters 1 Division Nigerian has been drawn to tension arising from an incidence that occurred at about 10:00am today 9 June 2017. A soldier of the Division Internal Security Force deployed at Command Secondary School Kaduna opened fire on some youths suspected to have encroached into the school premises.

“One of the youths was hit and died at the spot. Officers have been deployed to the scene of the incidence in response and the Police have also been invited to take control of the situation. The matter is been investigated and details will be made available as they become available.

“The General Officer Commanding, appeals to law abiding citizens to remain calm and go about their daily lawful activities, while assuring that 1 Division remains committed to security in its Area of Responsibility in conjunction with other security agencies.”