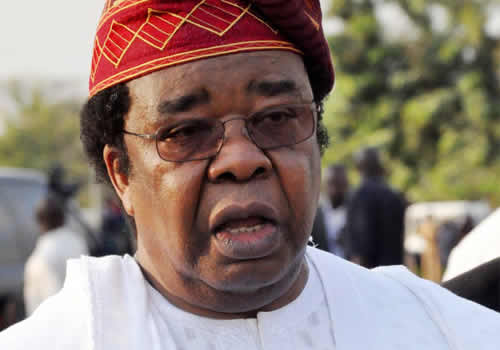 A former Minister of External Affairs has advised President Muhammadu Buhari to exercise a great deal of caution in unravelling the mysteries surrounding the N13 billion recovered from a Lagos apartment earlier this month.

In a statement circulated on Sunday, Bolaji Akinyemi said Mr. Buhari should not fall into the trap of treating the National Intelligence Agency like any other government department.

“External Intelligence operations do not belong into the same security genre as domestic security forces such as the SSS, EFCC and the Police,” Mr. Akinyemi, who was in office from 1985 to 1987, said.

He also urged that the ongoing efforts by the House of Representatives to probe the involvement of the NIA in the recovered funds be immediately halted.

The professor of political science was reacting to the recent discovery of funds in different denominations from an apartment at Osborne Towers, Ikoyi, Lagos.

The money, estimated to be N13 billion, was recovered on April 12 by EFCC operatives who acted on actionable information from a whistleblower, the anti-graft agency said.

The NIA later claimed ownership of the money through its Director-General, Ayodele Oke.

Mr. Oke has since been suspended over the controversy by President Muhammadu Buhari.

The controversy that trailed the discovery prompted Mr. Buhari to set up a panel to investigate and provide answers to crucial questions from the public, including the owners of the apartment where the money was found.

The three-member panel, headed by Vice President Yemi Osinbajo, is also expected to clarify why the NIA was in possession of the money and if the president had prior knowledge of it as asserted by Mr. Oke.

The two other members are Attorney-General Abubakar Malami and National Security Adviser, Babagana Monguno. They have 14 days to conclude their investigation beginning April 19.

In his statement, Mr. Akinyemi faulted the president for setting up a panel without including someone with deep understanding of foreign espionage.

“It would have been reassuring if the president had appointed a former head of or a former very senior member of NIA to be a member of the panel,” Mr. Akinyemi said.

Yet, the former minister said, it wasn’t too late for a person of such background to be named as a consultant to the panel

“It is not too late to appoint a retired head of NIA as a consultant to the panel,” he said.

Mr. Akinyemi advised members of the panel to desist from disclosing information about their findings on NIA to the public, including their final report.

“Under no circumstances should the report of the panel in as far as it relates to the activities of the NIA be made public,” he said.

More importantly, Mr. Akinyemi warned against allowing lawmakers to launch probe into the activities of the NIA.

“This is a dangerous move,” he said, adding that countries the world over do not engage in incessant probe of their external intelligence operations.

“Normally, foreign intelligence activities are shrouded in secrecy, and not in the glare of publicity,” he said. “No receipts get issued. Budgets are called black budgets because they are never publicly acknowledged.”

Mr. Akinyemi recommended that Mr. Osinbajo’s panel should disclose its findings only to Speaker Yakubu Dogara and Senate President Bukola Saraki if it is necessary that the National Assembly knows the NIA’s involvement in the recovered funds.

“Under no circumstances should the National Assembly be allowed to conduct hearings into the NIA affair,” he said.

Mr. Akinyemi, who supervised the NIA when he was minister of external affairs, said any officer found wanting in the N13 billion recovery must be made to face the law, even if it requires a new legislation.

“Putting a foreign intelligence officer on trial in an open court is going to be disastrous to external national security interests.

“Should any NIA officer be found culpable, he or she should be quietly eased out.

“If there is no provision to put an intelligence officer on trial in a secret and special court, an executive bill should be sent to the National Assembly to make provision for such,” Mr. Akinyemi said.

In a follow up conversation with PREMIUM TIMES, the former director of Nigerian Institute of International Affairs said he wasn’t canvassing a retroactive legal procedure to deal with the officers.

“Any officers found guilty in the recovered funds should be made to go quietly after refunding all their loot,” Mr. Akinyemi told PREMIUM TIMES Sunday evening. “The new law is expected to deal with future occurrences and it does not have to be retroactive.”