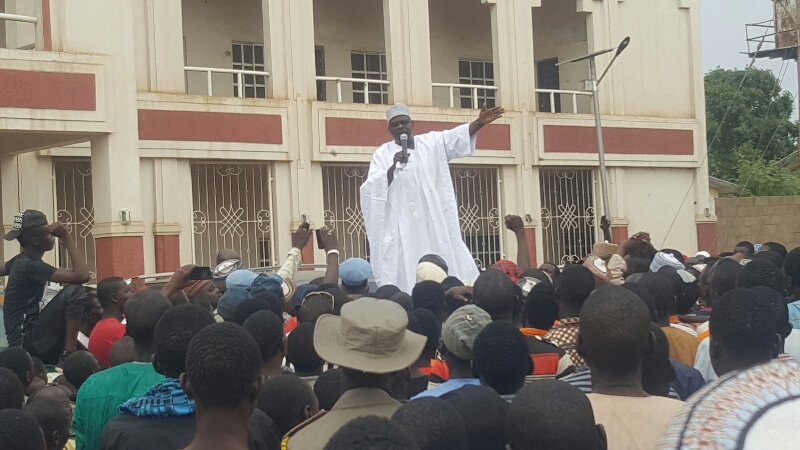 The suspended senator, Ali Ndume, has provided more insight into his suspension, saying he will not apologise to Senate President Bukola Saraki in order to get reinstated.

Mr. Ndume spoke on Saturday as a crowd of supporters turned out on to receive him when he visited his constituency, Borno South, for the first time since his suspension from the Senate.

He was placed on a 181-day suspension by his colleagues for demanding that the upper legislative house investigate newspaper publications that accused Mr. Saraki, and a fellow senator, Dino Melaye, of improper activities.

Mr. Saraki was accused of using fake Customs papers to import an official vehicle while Mr. Melaye was accused of lying that he graduated from the Ahmadu Bello University.

Following Mr. Ndume’s request, the Senate conducted an investigation that cleared the lawmakers, while Mr. Ndume was subsequently punished for raising a false alarm.

On Saturday, Mr. Ndume embarked on a visiting tour of some parts of his constituency where he was welcomed by supporters who declared support for him.

The lawmaker during the visit addressed his constituents at various locations where he informed them that his plight at the National Assembly was because of his insistence on doing the right thing.

The former Senate majority leader said his suspension was not just because of his call for his colleagues’ investigation.

The Gwoza-born politician visited Shani, Biu, Bayo and Kwaya Kusar local government areas of Borno state where he was received by politicians and monarchs.

Mr. Ndume informed a gathering at the palace of the Emir of Biu that he does not regret the actions that led to his earlier removal as Senate leader and his recent suspension. He said if his suspension was based on corruption or abuse of office, he would not have been well received by his people.

“Your Royal Highness, distinguished ladies and gentlemen, it took us hours to squeeze through the crowd of supporters to get to this place. And this gives me the greatest joy because my people still appreciate me.

“I will not remain a Senator for the rest of my life; but for the time I serve as the representative of my people, I shall continue to do and tell the truth. I know if I had erred, I would not have been received here. But I enjoy the support of my people because they know my suspension was because I spoke the truth.

“I know those that suspended me are going now regretting their actions because of the massive protest that trailed my illegal suspension. After seeing the support that I enjoy from Nigerians, the same people that suspended me came to say I should tender an apology so that my suspension could be lifted. But I said no to that because I did not commit any offence in the first place.

“They later came to say the Senate President, Senator Melaye and I should go and reconcile our difference; and I told them that I had no issue with either of them, so there is nothing to reconcile – as far as I am concerned we have a good working relationship.

“But I thank the Governor of Borno State, and Your Royal Highness, the Emir of Biu, and all those that sent emissaries in seeking to ensure that this issue is resolved. We are still talking, but I know I had not committed any offence.”

PREMIUM TIMES had exclusively reported the intervention of the Borno governor, Kashim Shettima, who met with Mr. Saraki in trying to ensure the reversal of Mr. Ndume’s suspension.

“My religion enjoins me to always stand on the path of truth even if I turn around and found that everyone has deserted me.

“Firstly, I know my trouble with them started because of my support for the policies and ideals of President Muhammadu Buhari. Secondly, when Ibrahim Magu’s name was brought to the Senate as nominee for the Chairmanship of EFCC, some group in the senate insisted that he would not be cleared. And in my position as the then Senate Majority leader, it was incumbent upon me to support any nominee sent in by the Executive. Besides that, the same nominee is from my state, Borno; besides, he had committed no offence to be denied the senate clearance.

“Above all, the majority of Nigerians loved him because he is doing the job well even as an acting chairman of EFCC.

“Thirdly, when he was brought in for screening and it was not successful, I took courage to tell them that they were acting out of the Senate order.

“And lastly, my position on the allegation levelled on the Senate President as well as the issue of Senator Dino’s certificate by a news medium was the final straw they needed to break the camel’s back.

“But Your Royal Highness, it is incumbent upon we the Senators, under Order 14-15 that if there is any issue or development or any action that tends to rubbish the integrity of the Senate, we stand up to ensure that we defend the name of the Senate. All I asked for was to investigate an allegation published in a news medium against two of our colleagues.

“The President of the Senate has all the powers to rule me out of order if he felt that the issues I raised were not welcomed on the floor of the Senate. But because they had always wanted to crucify me, they seized the moment to unleash their built-up angst against me. So, they gave a dog to hang me. And they did that when majority of the senators were not on seat.

“I thank God this turned out good to me, because it made me know how much love I enjoy from Nigerians,” he said.

The Senator said though he is on suspension, he would continue to work for his constituents especially in the area of constituency projects execution.

While the Emir of Biu, Umar Aliyu, assured the senator of his fatherly support and good wishes, his counterpart, the Emir of Shani, Nasiru Mailafiya, who was visited earlier, called for the reversal of Mr. Ndume’s suspension.

While welcoming the senator in his palace, Mr. Mailafiya, who sympathised with the lawmaker over his suspension, berated the leadership of the Senate for causing his constituents a setback by the six months’ suspension.

“We the people of Shani local government are solidly behind you. We are indeed saddened by the injustice that was done to you simply because you stood for the truth.

“The Senate might suspend you, but you still remain our serving senator. You have proven yourself as an illustrious son of Southern Borno. You’ve always been the eyes of Borno especially in our troubled moments. So, we will stand by you now that Abuja chose to punish you.”

The emir urged the lawmaker to carry on with his disposition and always speak the truth at all times.

“You have to stand by the truth and always be a supporter of the President. We love you and will forever continue to stand on your side as long as you represent the truth,” he said.

“I call on the Senate President and all others who joined in this anti-people decision to immediately reverse the suspension of our senator if they are true friends of Borno”, he said.

The senator who was accompanied by party chieftains distributed poverty alleviation items worth millions of naira to his constituents.

Boat Accident: Death Toll rises to nine as captain speaks on cause