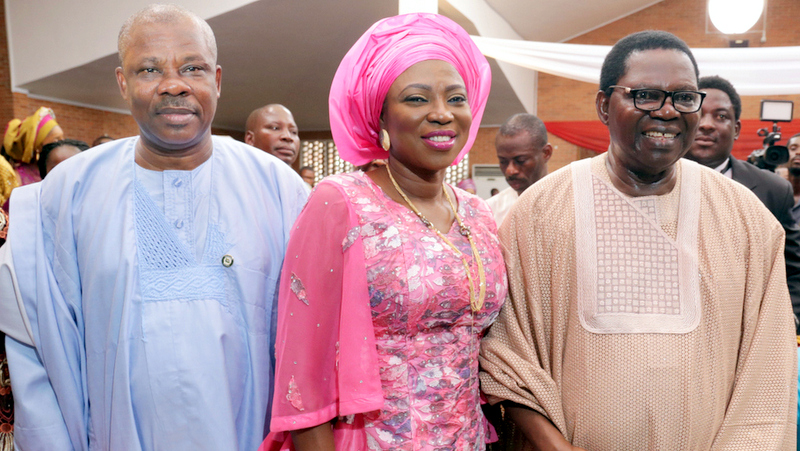 Encomiums poured in from across Nigeria as Juju music maestro, Ebenezer Obey-Fabiyi, clocked 75 on Monday.

Among the dignitaries who paid glowing tributes to the musician on Monday were former President Olusegun Obasanjo and former governor of Lagos State, Bola Tinubu.

President Muhammadu Buhari had on Sunday paid tribute to the music legend.

Mr. Obasanjo said the music of the man known by music lovers as ‘Chief Commander Ebenezer Obey’ always intoxicates him (Obasanjo) and has propelled him to do well in his life.

The former president disclosed this while speaking at the birthday ceremony of the musician in Abeokuta.

“I am always intoxicated by Ebenezer Obey’s music. When I want to do serious business, I play his music, I am always inspired and encouraged. His music teaches morals”, he stated.

Speaking about the fame the musician has achieved, Mr. Obasanjo pointed out that anyone can reach the top, no matter how poor the back ground is, if the person is focused and determined.

He fondly recalled that Obey sang about the Operation Feed the Nation (OFN), a policy he (Obasanjo) initiated in the 70s as a military Head of States to make Nigeria self – reliant in food production and consumption.

Mr. Tinubu, in his own congratulatory message, described Obey as an astute entertainer whose songs will always remain evergreen.

In a statement on Monday by his Media Office, the All Progressives Congress, APC, leader said: “I congratulate Chief Commander Ebenezer Obey on his 75th birthday. It’s a great accomplishment to so be blessed by God as he has been.

“Ebenezer Obey, whose professional career began in the mid-1950s when he moved to Lagos, has contributed a lot to the development of music in Nigeria, nay Africa.

“As a musician with a deep Christian spiritual bend, Obey’s music is unique in the way and manner he turns Yoruba axioms, bearing rich religious messages into dance-hall compositions.

“His popular tracks like ‘What God Has Joined Together,’ ‘Aimasiko,’ ‘Eyin Pegan’, Anjade Loni Eledumare’, ‘Jesu Olore’, ‘Africa is My Home’, ‘Ambe o,’‘I am a Winner,’ etc remain masterpieces any day.

“When in early-1990s, he retired into Nigerian gospel music ministry, I knew it could only be short-lived, because when you have a passion for a profession like Chief Obey’s zeal for music, whether secular or gospel, there is no room for retirement.

“I saw him in action in December last year at an event held at the Lagos State House, Alausa, Ikeja, tagged ‘Evening with Governor Ambode’to end 2016 and usher in 2017, he was the cynosure of all eyes.  He remained his true self, the true entertainer that we have always known, churning out one rich number after another.

“At 75, I wish and pray that God grants Obey more years and the strength and energy to continue with his music. So to Chief Commander, I say let the music play on,” Mr. Tinubu stated.

in his own remarks, the Ogun State Governor, Ibikunle Amosun, said his administration would construct a museum in honour of the musician, where all his works would be kept for references.

He described Obey as a great ambassador and expressed the hope that Ogun would accord him his rightful place in the annals of the state.

“All I see in him at 75 is the awesomeness of God in your life. Your music teaches totality of the essence of life and living. You have used music to do a lot even internationally”, Mr. Amosun said.

“You are a great ambassador of Nigeria and have shaped our lives positively. I’m a fan of your music and listen to it every morning because some of them remind me to pray every morning”, he added.

“We are looking forward to a time where we will build a museum for your music, where people will go to study you and your work. You have put Ogun State on world map because when people enquire about your roots, they will be told you are from Ogun State.”

The General Overseer of Redeemed Christian Church of God, RCCG, Enoch Adeboye, revealed that he elected to bend his rules and abandoned his schedules for the day to attend Obey’s event because of his love and admiration for him.

The cleric added that he and the musician arrived the world at the same period and walked in different directions before both also found their way to Christ.

“I have known Obey a very long time since the days of Miliki. I enjoyed everything about his music and we came to the world at the same period. And at the time I was giving my life to Christ, he too was moving the same side.

“I have to bend the rules to leave the Camp to attend this birthday ceremony because of my love and admiration for Obey’, Mr. Adeboye said.

In his sermon at the evet, Francis Oke, anchored his message on Psalm 71vs 1-3 and urged man to keep seeking the face of God for his favour, protection and mercy when old age beckons.

In response to all the encomiums, Obey ‎expressed joy and gratitude to God for sparing his life, and also appreciated his guests across the globe.