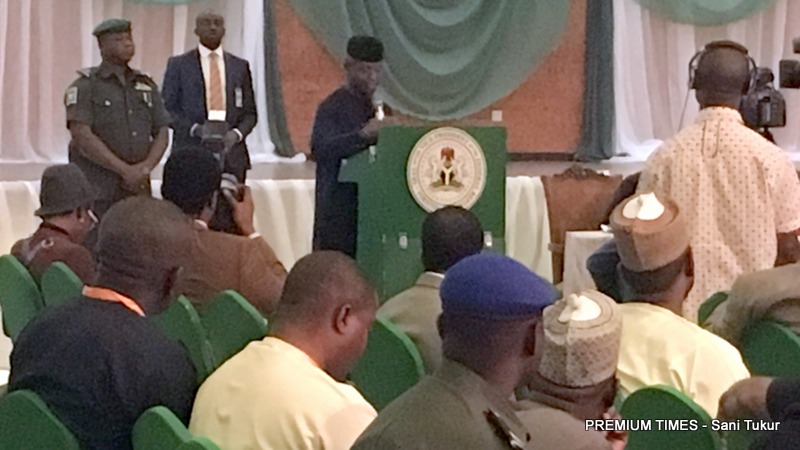 Acting President Osinbajo speaking at the opening of a two-day national dialogue on corruption organised by his office in conjunction with the Presidential Advisory Committee Against Corruption, PACAC, at the Banquet Hall of Aso Rock Presidential Villa on Thursday

How I fought corruption in Lagos Judiciary – Osinbajo

Acting President Yemi Osinbajo has given insight into how he successfully fought endemic corruption when he served as the Attorney general and Commissioner for Justice in Lagos State.

Mr. Osinbajo served as Lagos AG in 1999 under the administration of Bola Tinubu on the platform of the defunct Alliance for Democracy, AD.

Speaking at the opening of a two-day national dialogue on corruption organised by his office in conjunction with the Presidential Advisory Committee Against Corruption, PACAC, at the Banquet Hall of Aso Rock Presidential Villa on Thursday, Mr. Osinbajo said he knew there was problem in the Lagos state judiciary even before he assumed office.

He said when he assumed office, the first thing he did was to conduct a survey of about 200 lawyers “who were regular practitioners at the court” and asked them certain questions.

The acting president said one of the most fundamental questions in the questionnaire bordered on the “integrity of the judiciary”.

“89 per cent of the respondents said that the judiciary in Lagos state was notoriously corrupt,” he said.

He also said no serious background checks were carried out on prospective appointees. He said the take home pay of magistrates and judges was also found to be inadequate.

“We therefore, put in place a system of tests and interviews that each prospective appointee must answer satisfactorily,” he said.

He also said he subsequently put in place a team of seven senior judges and reviewed the monthly salary of judges which was about N67,000 and compared it to their average expenditure and then came to the conclusion that the take home pay of judges was grossly inadequate.

Mr. Osinbajo also said most good judges had no home of their own even after retirement and decided to not only increase the pay but provided each judge with a House.

“Every judge is given a house to live in and it belongs to him even after retirement. We also increased remuneration considerably,” he said.

The acting VP said after doing that he insisted that any judge accused of infraction is investigated and punished accordingly. He said within one year of the reforms, 22 magistrates were sacked while three judges were recommended for disciplinary measures to the National Judicial Council.

“When we conducted the same survey again in 2006, the outcome showed that there was zero per cent corruption among judges in Lagos state,” he said.

Mr. Osinbajo said people naturally have to see the consequences of bad behaviour before they toe the line.

The acting president also used the occasion to ask for additional cooperation from the international community on the recovery of stolen assets hidden in various countries.

He said the process of recovering stolen assets is very cumbersome and may even take several years. He then called on the international community to work with the Nigerian government to ensure that the assets are returned to the country speedily.