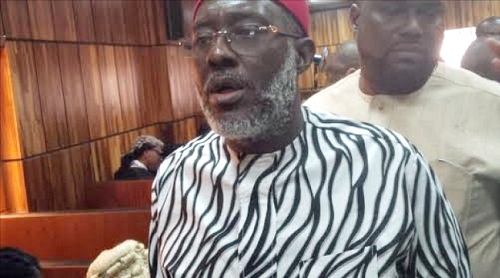 The Abuja Division of the Federal High Court has refused Olisah Metuh’s application to compel Sambo Dasuki, a former National Security Adviser, NSA, to testify in his matter.

The court also declined Mr. Metuh’s request to allow him go to the United Kingdom for eight weeks of medical treatment.

Mr. Metuh, a former spokesperson of Nigerians former ruling PDP, is facing trial for alleged diversion of N400 million he allegedly received from the office of the former NSA.

The trial judge, Okon Abang, said his application lacked merit and that Mr. Dasuki was not a “compelable witness.”

Mr. Metuh sought to get the court to compel the State Security Service, SSS, to present Mr. Dasuki as a witness in court.

Mr. Dasuki has been in SSS custody despite being granted bail by various courts.