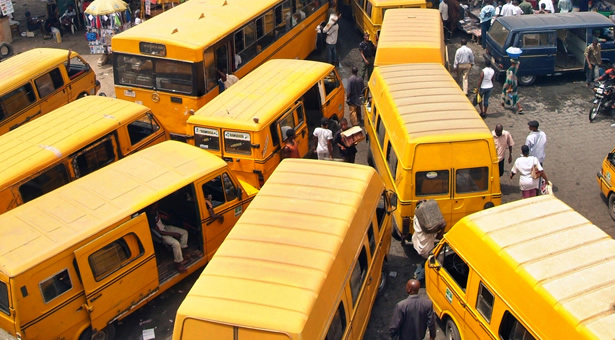 For Ayo Bamidele, a typical day begins at 4:00 a.m. and ends 19 hours later at about 11:00 p.m. A driver of the popular commercial mini-bus, otherwise known as ‘Danfo’, Mr. Bamidele plies the Oshodi-Ilupeju route of the Lagos metropolis. But because he resides in Agbado-Ijaiye part of the city, he wakes up very early and gets home late in the night. And, like most Lagosians, Ayo does not enjoy the 7-9 hours sleep range recommended by the National Sleep Foundation.

“That early morning ‘rush hour’ is when we make our money as transporters, so I cannot afford to sleep at home when others are making money or else I will go hungry,” he told PREMIUM TIMES in an interview.

“This is what I do to feed my family, pay rents and send my children to school,” he added.

But the recent pronouncement by Governor Akinwunmi Ambode to banish yellow buses from Lagos road has sent jitters down Ayo’s spine. Like most commercial bus drivers in Lagos, he is apprehensive. He told our correspondent that if the government eventually executes its plan, he is worried about the fate of commercial bus drivers whose source of income is the yellow ‘danfo’ bus.

“To be frank, many of us are afraid now. We don’t know what the government wants to do exactly and what it wants us to do; we don’t know how it expects us to feed our families and survive if it banishes ‘danfo’ from the road,” he told PREMIUM TIMES.

While speaking at the 14th Annual Lecture of the Centre for Value and Leadership held in Lagos  with the theme: “Living Well Together, Tomorrow: The Challenge of Africa’s Future Cities,” Governor Akinwunmi Ambode of Lagos State had said that he would banish yellow commercial buses from Lagos roads this year.

Mr. Ambode, while buttressing his points, had maintained that connectivity was a critical element for a mega city to work, which required having mass transit systems to move people from one point to another.

“I tell you what, I want to banish yellow buses from Lagos this year,” the governor had said, adding that there was still a lot more to be achieved as regard making Lagos one of the vibrant cities of the world.

“My dream of ensuring that Lagos becomes a true megacity will not be actualised with the presence of these yellow buses on Lagos roads.”

According to Mr. Ambode, cities are the most attractive destination for those who want to realise their dreams.

“It is estimated that 86 immigrants enter Lagos every hour – the highest in any city in the world – and they have no plans to leave.

“This is because Lagos has remained over time, and most especially in the last decade, the most attractive destination for those who want to realise and live their Nigerian dream.

“This ever increasing population of the state however means that we have to be on our toes to provide facilities for this more than 23 million population,” Mr. Ambode said.

The state government has, however, not announced the modalities for the phasing out of the buses.

A survey by PREMIUM TIMES revealed that some commercial bus drivers in the metropolis believe the proposed plan cannot be executed by the state government. Many of them expressed concerns over what would become of them if thrown off the road.

“It is not possible… it is a crazy idea. Who will feed our families? What job has the so-called government created for us? Where does he want us to dump our numerous buses? Would the proposed new buses even reach every part of Lagos like we do? It is a crazy idea…” an apparently furious Joe Eze, a commercial bus driver at Ilupeju, told our correspondent.

For another driver who simply identified himself as “Baba Luku”, the  yellow commercial mini-bus popularly known as ‘Danfo’ has been a part of Lagos for a long time and it would be difficult, if not impossible, for any government to banish it from the road.

“Those who say they want to banish yellow buses from our roads, as well as their forebears, met the system on ground. ‘Danfo’ is Lagos and Lagos is ‘Danfo’,” he told PREMIUM TIMES in Yoruba language, amidst laughter.

Baba Luku, who plies the Mushin-Oshodi route of the metropolis, added that the plan, if executed, would only aggravate the security situation in the state, noting that it would negatively affect the rate of armed robbery and all sorts of criminal activities in the state.

“Ambode is doing fairly well in terms of security, let him not jeopardize his efforts with this ill-conceived idea. Where does he want the army of conductors and drivers of the yellow buses to go? He wants to push us into criminality?” he said.

Ayo Bamidele, a driver, said, “I have a family I feed, clothe and send to school from this business. I am a Poly(technic) graduate but there is no job. The government doesn’t provide jobs yet it wants to take away the one we have. It is unfair.”

Others who spoke with our correspondent however pleaded with the state government to look into the plan holistically, by considering its implication on the lives of people who feed their families with the income generated from their daily operations as drivers and conductors.

On his part, Edwin Igwe, a driver who plies the Oshodi-Toll gate route of the city, pleaded with the government to be considerate in the execution of the policy, adding that an alternative plan should be provided for the drivers.

“Government should be considerate… some of us took these buses on ‘hired purchase’ arrangement, how does it want us to survive and pay the debt? Where do we even dump the buses? The plan is hasty and insensitive,” he said.

Explaining further, he noted that the government could as well extend the period it plans to banish the buses from the road, so it would enable affected drivers plan for other means of survival.

“Even if Ambode wants to ban the yellow buses, it should not be this year. He could as well give us a three or two years notice so that those who want to invest in other businesses would have time to plan and invest.”

Mr. Bamidele, who plies the Oshodi-Ilupeju route, said the government could as well adjust the present system by regulating the activities of the bus drivers and conductors, rather than banish them from the road.

“If you want to take something from someone, you give him another thing. The government can come up with alternatives for us or even make adjustment to the present system instead of banishing our buses from the road,” he said.

When PREMIUM TIMES approached a member of the National Union of Road Transport Workers, NURTW, Oshodi unit, he declined to speak with our correspondent.

Mixed reactions, however, trailed the news of the proposed ban among passengers who spoke with PREMIUM TIMES.

“I think the plan is good and will enhance development. But it will also force people out of job. Government can look at it very well and see how it will minimize the negative effects,” a trader at Oshodi market, Sadiat Ajani, said.

“It is the best thing to come out of this (Ambode) administration, I support it hundred percent. Those drivers are so reckless and manner-less. They deserve to go,” a civil servant who declined to have his name in print, told our correspondent at Ikeja.

Others who expressed concern over the operations of the government-owned buses, said the ‘Danfo’ drivers should be spared but their routes could be defined and regulated.

“I think traders will be most affected by this plan. Let them have dedicated routes. The state-run BRT buses don’t allow traders and their goods to join the buses. Yellow bus drivers and conductors are the ones we rely on. It is possible this new system too will not allow us (traders) convey our goods in their buses. It will just lead to suffering and frustration for us (traders),” an agricultural produce trader who simply identified herself as Alimot, told our correspondent.

A civil servant who works on the Island, Ade Johnson, however, said the plan would affect the transport system in the state as the proposed government-run buses would not be as effective as the yellow bus system.

“I work in Victoria Island and I leave at Sango; only the yellow bus can ensure that when I wake up by 4:30 a.m., I will get a bus and get to office in no time,” he said.

“As you can see, if those yellow buses are banished from Lagos roads, passengers are the ones who would bear the brunt and suffer the most.”