South Africa will introduce a national minimum wage of 3,500 rand ($261) per month in 2018, Deputy President Cyril Ramaphosa said on Thursday, according to a Reuters report.

The announcement follows protracted negotiations between the government and labour unions.

Nigeria’s current minimum wage is N18,000 ($60) with organised labour asking it be increased to at least N50,000 ($166), despite several state and local governments defaulting on the existing amount.

The Nigerian government has not acceded to labour’s request amidst a biting recession that has crippled Africa’s largest economy.

Workers have meanwhile complained the N18,000 is way below a living wage and cannot meet basic needs of workers.

Supporters of a South African minimum wage say it can stimulate growth as workers can spend more, and reduce inequality.

Critics say it could lead to increased unemployment as employers will be unable to afford higher wage bills.

Credit ratings agencies have said agreeing a minimum wage would help Africa’s most industrialised economy hold onto its investment-grade rating by stabilising the labour market and reducing the number of strikes. 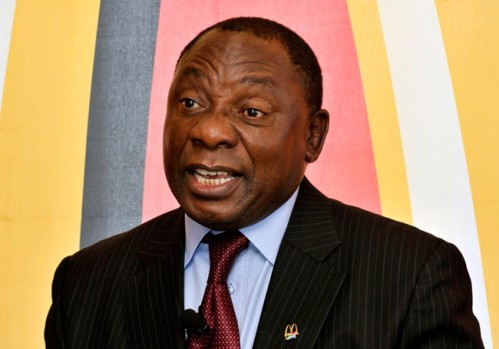 “The balance we have sought to strike is that it must not be too low, so that it doesn’t affect the lowest paid workers, but not too high that it leads to massive job losses,” Mr. Ramaphosa told a news conference.

Mr. Ramaphosa said the national minimum wage, which equates to 20 rand (1.50 dollars) per hour, would come into effect in May 2018.

Businesses that are unable to afford the minimum wage would be permitted to apply for an exemption of up to 12 months, he said.

The Treasury had also thrown its political weight behind the policy initiative.

Chief economist at Nedbank, Dennis Dykes, said the agreement was a sign of an improving relationship between labour, business and government, but warned that its implementation needed to be monitored.

“It is by no means certain this will lead to job creation.

“It needs to be watched carefully for any negative effects,” Mr. Dykes said.

Many workers earn far less than that, with domestic workers and farm labourers among the lowest paid.

Some unions had asked for a minimum wage of as much as 4,500 rand.

South Africa’s mining sector was brought to its knees by a crippling five-month stoppage over pay in 2014,pushing the economy to the brink of a recession.

South Africa’s unemployment rate hit its highest level on record, 27.1 per cent of the workforce, in the third quarter of 2016, and it remains amongst the world’s most unequal societies.

Buhari is victim of own transparency, says Lai Mohammed