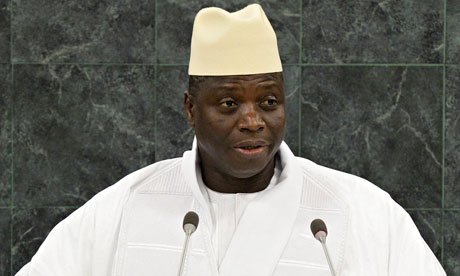 A day after the country’s Supreme Court advised an out-of-court settlement, Gambian President Yahya Jammeh has appointed a mediator to liaise between him and President-elect Adama Barrow.

PREMIUM TIMES reported how Emmanuel Fagbenle, Gambia’s Chief Justice, advised the settlement after ruling that the court could not hear Mr. Jammeh and his party’s appeal against the result of the presidential election due to non-formation of constitutionally required quorum of five Supreme Court judges.

On Wednesday, Mr. Jammeh appointed a mediator to facilitate meetings between himself and Mr. Barrow.

Mr. Jammeh, who ruled the small West African nation with an iron fist for more than two decades, declined to accept the result of the December 1 presidential polls, which saw him lose power.

Mr. Barrow, a former real estate agent, who was little known before he announced his candidacy, is scheduled to take office on January 19.

The ruling party’s secretary general will mediate between Mr. Jammeh’s supporters and the opposition to “resolve any mistrust and issues,” Mr. Jammeh said in a televised address to the nation early Wednesday.

He refuses to accept the election result because it was “full of arithmetic errors and anomalies, it also could not be credibly explained,” the outgoing president added.

Mr. Jammeh ordered the justice minister and national assembly to draft a general amnesty bill, while issuing an executive order not to arrest or prosecute citizens for “acts or omissions’’ committed during the pre and post electoral period, between November 1 and January 31.

The announcement comes a day after the Supreme Court postponed hearing on a court petition filed by Mr. Jammeh to challenge the election results.

The case was adjourned to Monday since only one of a required minimum of five judges was present, the court’s registrar said.

Several West African heads of state meanwhile postponed a meeting with Mr. Jammeh aimed at helping to resolve the political crisis from Wednesday to Friday.