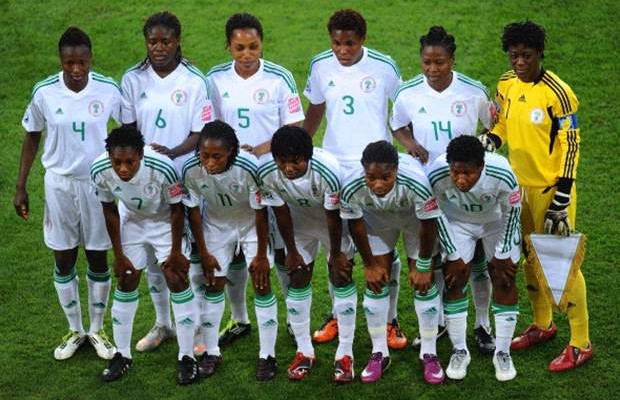 The Super Falcons of Nigeria are ready for battle at the Ahmadou Ahidjo Omnisports Stadium in Yaoundé as they go to war against their Cameroon counterparts.

The Falcons, looking to again confirm their dominance in Africa, are targeting a record eighth AWCON title in today’s final against the Indomitable Lionesses.

Cameroon on their part are desperate for their maiden crown and would have to be at their best to upset the fired-up Nigerian side.

They will hope to keep that tradition on Saturday.

Stay here for Live updates from the 2016 AWCON FINAL.

10’mins Nigeria 0-0 Cameroon… The Indomitable Lions with the better chances so far.

The Cameroon Coach has been the busier of the two coaches as he has been barking instructions to his team.

Free kick for Nigeria. The Falcons are yet to trouble the Cameroon goalkeeper in this game.

Anxious moments in the Nigerian defense but the ball is finally cleared!

Big Save from Nigerian goalkeeper Alaba Johnson. One on one chance of the Cameroon Ladies.

Nigeria Captain Rita Chikwelu is lying on the turf after receiving a shot to her ribs from the Cameroons.

A long free kick… Oparanozie gets a flick header but not enough to cause any problems for the Cameroon keeper.

Rising shot from the Cameroon free kick.. and its over the bar!!

The Falcons need to step up their game if they want to win this contest……As it stands the Cameroon team have shown greater hunger; creating series of chance with only Jonathan Alaba coming between the Cameroonians and a goal…

Can Nigeria Coach pull off a tactical change that can salvage this game??

We have crossed the hour-mark and it is still goalless in the 2016 AWCON Final ongoing in Yaounde.

Change by Nigeria. Nwogu Success in for Francesca Ordega.

Nigeria goalkeeper Alaba Johnathan and a Cameroon player are both down on the turf receiving treatment after a collision.

A tame shot by Cameroon and Alaba makes an easy save.

Nigeria’s Halimat Ayinde moves out for treatment for suspected cramp.

All the knockout games in this competition has ended in 1-0 scorelines. Can the Falcons hold on to win their eight African title?