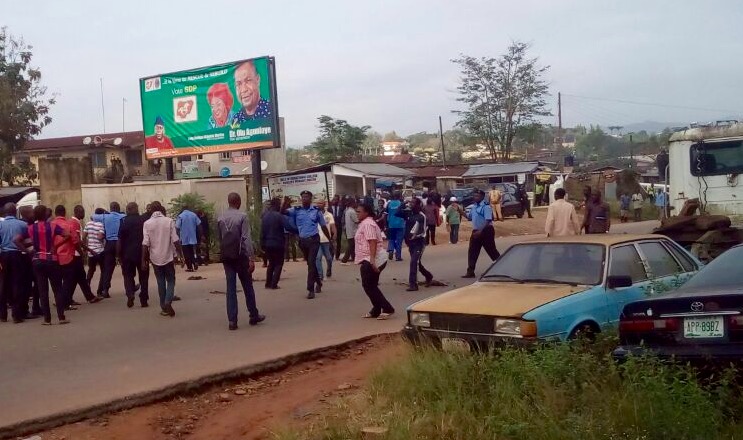 Some police officers gave vent to their frustrations on Monday in Ondo Town after police authorities refused to pay allowances due to them for covering the Ondo State governorship election.

In their protest which took place at Funbi-Fagun area of the ancient town, the police officers, comprising regular and mobile police officers, barricaded the popular Ondo/Ile-Ife Expressway with the patrol vehicles used for the Saturday election.

The blockade resulted in heavy traffic snarl on the highway which lasted for several hours and left motorists and travellers stranded.

The protesting officers vowed to restrict movement of vehicles along the road until they were paid their allowances.

Some of the police officers who spoke to journalists, but refused to have their names mentioned, accused senior officers of the force of denying them of their entitlements for the election.

They said as result, they were left stranded 48 hours after the conclusion of the election.

“They refused to pay our allowances after the election, we all believed that the money was released by the Federal Government to our ‘Oga at the top’ but they refused to release the money to us,” one officer said.

“We will cause trouble and make them realize that they are the ones encouraging corruption in this country.”

Another police officer not part of the protest, who spoke to PREMIUM TIMES on the phone, on Monday, said there were signs that the superior officers in charge had diverted the funds meant for the payment of the police allowances.

“We have since returned, we have not seen any money. We have resorted to prayers so that they will pay us the money,” he said.

However, the Police Public Relations Officer of the Ondo State Police Command, Femi Joseph, denied that there was protest by the police officers in the state.

“There was no protest anywhere, it was the senior officer that was addressing the junior ones in Ondo for performing successfully well during the last Saturday’s election,” he said.

“In such a situation they may be shouting for joy and so some people thought it was a protest.”

PREMIUM TIMES had reported how the officers, many deployed from other states like Ogun and Oyo were shabbily treated and left to find their own accommodation in Ondo after they arrived for the election.
The spokesperson for the Nigeria Police, Don Awunah, had acknowledged the problem and said efforts were already underway to ensure that the officers receive their pay as soon as possible.

“Yes, we’re aware at the headquarters that they have not been paid,” Mr. Awunah said. “But we implore them to take it easy as the Inspector-General is working on their finances.”

“They will start receiving payment alert before the election begins in four days since we already have their personal accounts.”

That promise turned out to be false.

“None of us has received a dime,” a police officer deployed from a neighbouring state told PREMIUM TIMES on Monday.

“I and some friends have had to borrow to survive in Ondo since Sunday (November 20). We slept on the road for days.

“Later Nigerians will say we collect bribe; if you were in our shoes, what would you do,” he asked rhetorically.