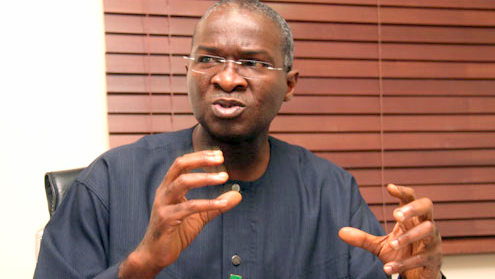 The Minister of Power, Works and Housing, Babatunde Fashola, has warned Electricity Distribution Companies (DisCos) to stop blackmailing the Federal Government over outstanding debts allegedly owed them by Ministries, Departments and Agencies (MDA).

A statement in Abuja on Tuesday by Hakeem Bello, Special Adviser, Communications to the minister, stated that Mr. Fashola gave the warning at a meeting with power sector operators in the country.

Mr. Fashola was reacting to the advertorial placed by the Association of Electricity Distributing Companies (AEDC) on the debt owed DisCos by MDAs.

He said government would not succumb to blackmail and would only pay verified debts.

Mr. Fashola also advised the DisCos to pursue the debt issue in their capacities as Discos and not under the aegis of any association.

He said that although the constitution guaranteed freedom of association, the privatisation that resulted in the transfer of the distribution asset of power was not held between the Federal Government and any association.

According to the minster, the DisCos have so far failed to provide details of such debts for verification.

Fashola said “Let me say without any equivocation that government will not succumb to the blackmail, at least not the Federal Government of Nigeria”.

He said that government had provided an online platform where it requested all the DisCos to submit details of their debts to that platform for government to verify it.

“But the Nigeria government will not pay its debts estimated to be about N100 billion under the aegis of an association.

“That is not how to resolve debts, every DisCo knows how much power it supplied.

“Debts are not calculated by estimates. It is either N100 billion or less than N100 billion but not an estimate,” the minister said.

He promised to respond on behalf of government to provide the other side of information, anytime the DisCos go to the public without giving them the full information.