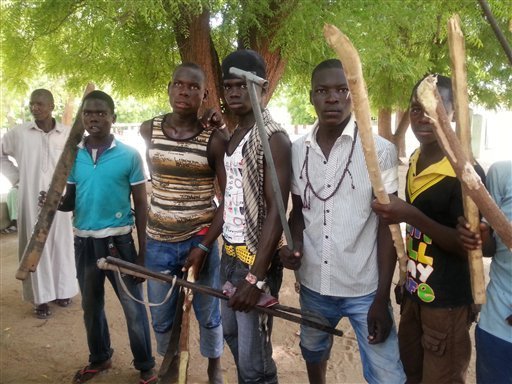 A cross section of Civilian JTF fighters in the North-East

The police in Borno State have confirmed the death of six persons in multiple explosions in the state capital, Maiduguri.

The police said four of the victims were Boko Haram suicide bombers while two were members of the local vigilante called Civilian-JTF.

The six were killed in the morning blasts, reported by PREMIUM TIMES, that occurred in three different locations in Maiduguri.

Hours after two suicide bombers detonated their explosives killing themselves at a security check post near a federal high court complex in Jiddari Polo, a suburb of Maiduguri, two more explosions were heard echoing from the eastern flank of the city.

The Borno State Commissioner of Police, Damian Chukwu, confirmed to journalists at a press briefing that a suicide bomber tried to enter Muna Garage, a usually crowded bus station, but later detonated the explosive at the gate, killing himself.

The third blast took place few meters away, near the city’s entrance gate, where security personnel mounted a check post. Two operatives of the Civilian-JTF were killed alongside the suicide bomber.

The police chief called on residents to be more vigilant and report any form of suspicious movement of persons around their locale.

Over 20,000 people have been killed in Boko Haram related attacks since 2009 with millions of others displaced.