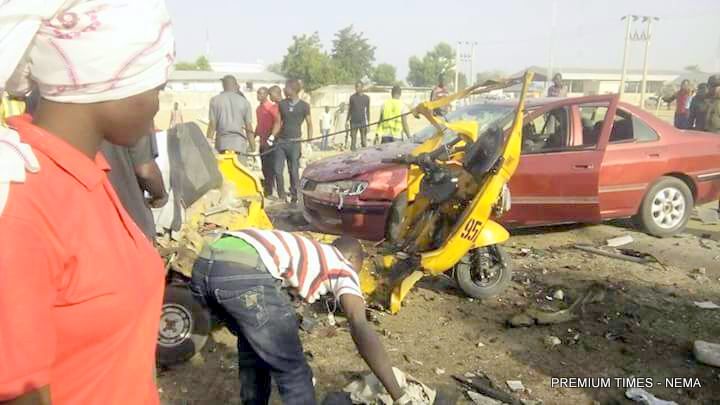 At least six persons have been killed in an early morning bomb attack in Maiduguri, Borno State, on Saturday, according to witnesses.

Twin blasts, which echoed across the city, occurred at two different spots, about 1km apart.

The first blast went off at about 7a.m. at a coffee drinking spot near the Bakassi IDP camp, along the popular Maiduguri-Biu road.

“Six persons were reportedly killed in the blast and have been evacuated to the hospital,” said Yunus Musa, a resident of the area.

Shortly after that, at about 7.35a.m., another blast went off in a tricycle near the NNPC fuel depot along Damboa Road, killing a woman and the rider. It was not clear who the bomber was between the woman and the tricycle driver.

An official of the Civilian-JTF, Alhaji DanBatta, who also confirmed the two incidents, told PREMIUM TIMES that the first blast came from suicide bombers who were trying to invade Bakassi IDP camp, one of the largest displaced persons camp in Maiduguri.

“We have another sad day today, but we thank God the worst did not happen; because the suicide bombers actually wanted to enter Bakassi camp, and that could have been really bad,” said Mr. DanBatta.

“There was another one just opposite the NNPC Depot along Damboa Road. But I cannot give you the details of the casualties recorded immediately because we are presently conveying the victims to the hospital. I will get back to you when the doctors confirm their conditions,” he said.

The city has not witnessed bomb attacks for months, and the twin blasts have created panic amongst residents who had started to let go of their fears of terrorist attacks, a PREMIUM TIMES correspondent in the city said.

U.S. admits own election could be violent, assures foreign journalists of protection

INTERVIEW: Why Nigerian Shiites should be allowed to fully practise their faith — U.S. Envoy