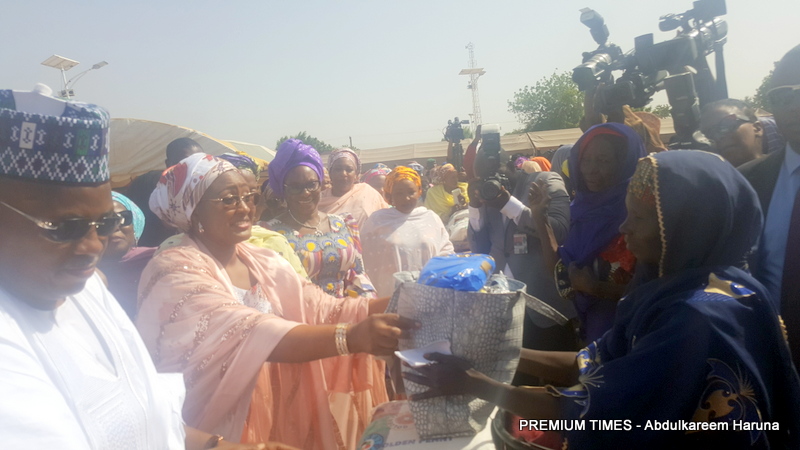 Aisha Buhari backs President weeks after criticising him in interview

President Muhammadu Buhari’s wife, Aisha, on Thursday reassured his supporters that she was committed to the success of her husband’s administration.

In her first public comment since the furore ignited by her criticism of her husband’s administration in an interview she granted the BBC Hausa Service, Mrs. Buhari said she was relieved that the administration had started to fulfill some of the promises the president made during the electioneering campaigns.

Mrs. Buhari spoke when she paid a visit to Benisheik, one of the liberated towns of Borno State, to flag off the distribution of relief items to displaced rural women. She made the gesture under the Get Involved initiative, a sub-component of her pet project, Future Assured.

The initiative seeks to harness donations from individuals and organisations for the support of victims of violence.

The president’s wife told the gathering that she was committed to seeing her husband succeed as president of Nigeria.

In the BBC interview, Mrs. Buhari had criticised her husband for allegedly sidelining his long-term loyalists and political associates.

She also vowed not to support his bid for reelection unless he quickly corrected the perceived anomaly.

The president’s public response suggesting his wife had no business expressing views on his government, and that she belonged in the kitchen, further stoked the controversy.

But Mrs. Buhari appeared to have put the controversy behind her on Thursday as she flew into the North-east state, worst affected by the Boko Haram insurgency.

Mrs. Buhari, who arrived the Maiduguri International Airport at about noon in the company of wives of service chiefs and political party women leaders, was received by the wife of Borno State governor, Nana Shettima.

From the airport she and her team were flown in a Nigerian Airforce Agusta-105 combat chopper to Kaga, headquarters of Kaga local government area of the state.

Awaiting her in the town was a delegation of Borno State government officials led by Governor Kashim Shettima.

Addressing the gathering in Kaga, Mrs. Buhari said she was happy that her husband’s government had begun to fulfill campaign promises to Nigerians, and “especially to the distressed people of Borno state”.

She said: “On our campaign promises to Nigerians, especially to the people of Borno State, we thank Almighty Allah for giving us the opportunity of beginning to fulfill these promises.

“That is the essence of being a good leader; when you promise, you try to fulfill your promises.

“That is what we are all after. And what I am after in particular is the success of my husband’s administration. And we can’t do it alone, except with the help of the governors, their wives and members of our progressive party and all Nigerians.”

Mrs. Buhari said the distribution of relief items was part of her Get Involved project, which she hopes to carry on in the state through a committee led by the wife of the state governor.

“As you are all aware, some weeks ago, I had launched a component of my programme, Future Assured, known as Get Involved, which is aimed at bringing all Nigerians together; and it has integrated and united the people of Nigeria.

“The launching of Future Assured has consolidated and united the people of Nigeria. The relief items you are seeing today were received from well-meaning Nigerians who sent their regards and congratulatory messages.

“It is on that note that I am here today to flag off the distribution of the food items donated by well-meaning Nigerians from across the country. I thank all Nigerians for this support for the people of Borno State.”

Earlier, the Borno state governor and his wife commended Mrs. Buhari for making regular visits to Borno State. Mrs. Shettima noted that Thursday’s visit was the third since her husband assumed the presidency of Nigeria in May 2015.

Governor Shettima said Kaga town was totally destroyed and sacked by Boko Haram insurgents, until it was liberated with the coming of the administration of President Buhari.

“Two years ago it would have been impossible for us to hold this kind of high-level occasion here; our security forces would never have allowed us for fear of the unknown,” the governor said.

“But today we are here under an atmosphere of peace and tranquility, and this is the situation that is prevailing in most parts of Borno state.

“We want to thank our mother, Hajiya Aisha Buhari, who has shown so much love and affection to Borno State. This is not her first time of coming to Borno. And this time she even ventured to visit the hinterland to see how our people are faring and to show empathy and support to the people of Kaga local government.

“We are mightily proud of her; we are eternally indebted to her and insha Allah (by God’s grace), in the fullness of time when the history of this epoch is going to be written, her name will be written in gold.

“You are indeed a proud daughter of the North-east and you have played a pivotal role in the passage of the bill establishing the North-east Development Commission. And it is pertinent to mention that you are of Borno by extraction.

“We want to thank you and all members of your delegation, especially eminent persons like Dame Pauline Tallen, former deputy governor of Plateau State, who has been with Her Excellency, wife of the president, each time she visits Borno and other places in Nigeria.”