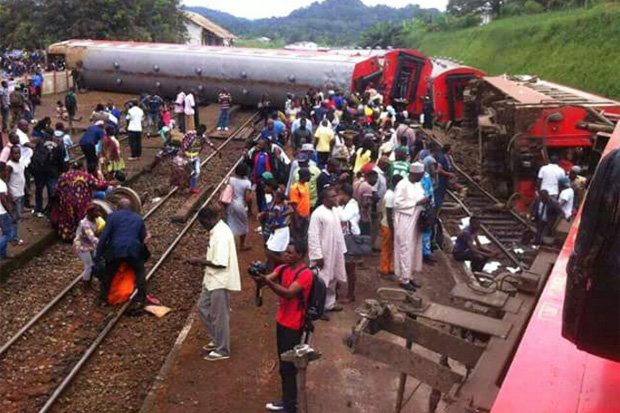 More than 70 people were killed and over 600 injured when a packed passenger train crashed in Cameroon on Friday, the president announced on Saturday, declaring a national day of mourning.

The packed Camrail train had been traveling from the capital Yaounde to the port city of Douala.

It derailed at around 11 a.m. local time (1000 GMT) near the station in the town of Eseka, 120 km west of the capital, causing carriages to overturn.

“My heartfelt condolences to the bereaved families of the Camrail train derailment in Eseka. Over 70 passengers died and 600 wounded in the accident,” President Paul Biya, who is travelling abroad, wrote on his official Facebook page.

“I instructed the government to provide full assistance to the survivors, while investigations will be made to determine the cause of the derailment.”

Mr. Biya decreed that Monday would be a national day of mourning with flags flown at half-mast.

Witnesses, including a Reuters reporter travelling on the train, said rail workers had added additional carriages to accommodate extra passengers before its departure, though it is not clear if that decision contributed to the accident.

Camrail, a unit of French industrial group Bollore, said in a statement it was working with Cameroonian authorities to ensure care for the injured and support for victims’ families.

“Technical investigations are under way currently to determine the causes of this dreadful accident and the conclusions, as soon as they are known, will be communicated,” the emailed statement said.

Work began during the night to remove the derailed wagons from the line – one of the main routes for goods and passengers between the main port and the interior.

“The train with wounded and the bodies of victims has arrived at Yaounde station in the presence of government and Camrail officials,” Camrail posted on its official Facebook page earlier on Saturday.

A Bollore official based in the region, who was not authorised to speak with the press and asked not to be named, said the company was cooperating with authorities examining the crash.

“Camrail has made the train’s conductor and its mechanic available to the judicial police, because in these kinds of circumstances that is the procedure. That will allow for an understanding of what happened,” the official said.

He added that traffic along the Yaounde to Douala line, which was halted following the crash, and was expected to resume soon and engineers were at the site of the accident to evaluate the damage.

The collapse of a section of the main highway between Yaounde and Douala amid heavy rain earlier on Friday had blocked hundreds of vehicles on the road and prompted increased numbers of passengers to make the journey by rail.

The two incidents on the same day cut the main transport axis in the central African nation of over 22 million people. (Reuters/NAN)