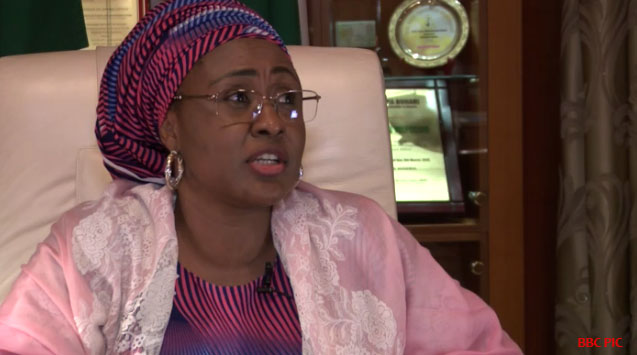 I may not support Buhari’s re-election in 2019,  Nigeria’s First Lady Aisha warns

Aisha, the wife of Nigeria’s President Muhammadu Buhari has said she may not back her husband’s re-election in 2019 unless he shakes up his cabinet.

In an interview with the BBC, Mrs. Buhari said the president “does not know” most of the top officials he appointed to office.

Mr. Buhari has not indicated whether or not he will seek re-election, and according to his wife, he has not told his family too.

“He is yet to tell me (if he’ll seek re-election) but I have decided as his wife, that if things continue like this up to 2019, I will not go out and campaign again and ask any woman to vote like I did before. I will never do it again,” she said.

The Nigerian leader is allowed by the constitution to seek re-election for a second term in office. Should he seek re-election, he is expected to be the candidate to beat for his All Progressives Congress, APC, party; although he could be challenged by former Vice President Atiku Abubakar who lost to him in the 2014 primaries.

Mrs. Buhari also gave an indication of something which has caused silent anger amongst some leaders of the APC.

She said some of the president’s appointees did not share the vision of his party and were appointed because of the influence of a “few people.”

“Some people are sitting down in their homes folding their arms only for them to be called to come and head an agency or a ministerial position,” she said.

Asked to name those who had hijacked the government, she refused, saying: “You will know them if you watch television.”

One name that has been repeatedly mentioned as having a strong influence in Mr. Buhari’s appointments is his cousin, Mamman Daura.

Mr. Daura, who holds no official position, is said to be the most powerful man in the presidency and is said to have Mr. Buhari’s ears.

There had been rumours within the Aso Villa of him having clashes with Mrs. Buhari over his influence on the president.

On whether the president was in charge of his administration, Mrs. Buhari said: “That is left for the people to decide.”

Mrs. Buhari’s decision to go public with her concerns may shock many people, but it shows the level of discontent with the president’s leadership, the BBC quotes its reporter Naziru Mikailu, as saying Abuja.

Speaking further on the appointments, Mrs. Buhari said, “The president does not know 45 out of 50, for example, of the people he appointed and I don’t know them either, despite being his wife of 27 years.”

She also mentioned the improvement of security in the north-east as her husband’s major achievement.

“No-one is complaining about being attacked in their own homes. Thankfully everyone can walk around freely, go to places of worship, etc. Even kids in Maiduguri have returned to schools,” Mrs. Buhari said.