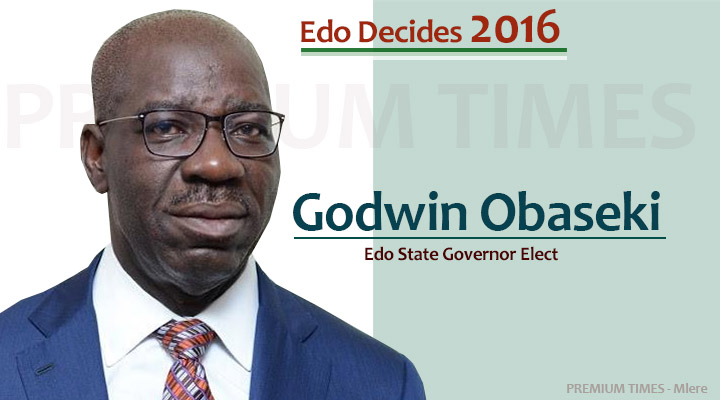 The candidate of the All Progressives Congress, Godwin Obaseki, has been declared winner of the Edo State governorship election.

The APC candidate won majority of the votes cast, getting a total of 319,483 votes, the Independent National Electoral Commission, INEC, announced.

Mr. Obaseki also won majority votes in 13 of the 18 local governments in the state, losing the remaining five to the PDP candidate.

The INEC chief returning officer in the state, Professor Kayode Soremekun, who announced the final results, declared Mr. Obaseki the governor-elect of the South-South state.

However, the PDP in the state has rejected the results describing it as adulterated.

“If you go by the results that were announced at the polling units and wards across the state, it shows the PDP would have won by over 30,000 votes,” said Dan Orbih, the party’s state chairman in a press conference.

“What INEC is announcing is clearly different from what we got from our agents and independent observers in the 192 wards and over 2,000 units across the state.”

The PDP agent at the collation centre also refused to sign the final result sheet.

“I cannot endorse it,” he told the INEC officials present. “You said I should get ready for court instead of looking at it here and now. I cannot be a party to that,” he said.

The agent of the Young Democratic Party also refused to sign the final result sheet.

“I have the mandate of the Young Democratic Party not to append my signature on this result sheet,” he said.