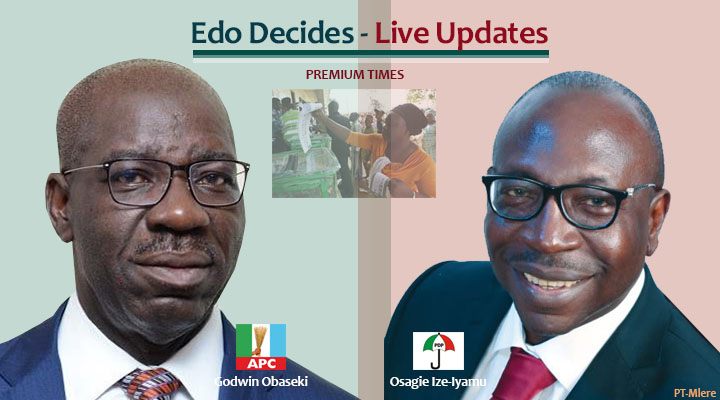 Although voting ended on Wednesday afternoon in all the 18 local governments of Edo State, delay in the collation process meant ‎no result was officially announced by the electoral commission, INEC.

PREMIUM TIMES’ Ben Ezeamalu and Oluwole Josiah continue their live report of the elections by bringing you the official results as announced by INEC from its secretariat in Benin.

The result is expected to be a two-horse race between the candidate of the ruling All Pro‎gressives Congress, APC, Godwin Obaseki, and Osagie Ize-Iyamu of the Peoples Democratic Party, PDP.

Phillip Shaibu, the running mate of the governorship candidate of the All Progressives Congress, Godwin Obaseki, is now at the INEC office to protest the cancellation of results of some units in his ward in Jattu, Etsakor West Local Government Area.

The deputy governorship candidate who arrived the INEC office at about 8 a.m. was barred from entering into the office with the collation officer for Etsakor West.

He was told he could not enter nor be anywhere around the vicinity of INEC office. Only his agent could have access, he was told.

But Mr. Shaibu insisted he had a complaint to make against the collation officer whom he said had no right to cancel the units.

The argument degenerated into pushing as he forced his way through the security blockade.

He, however, managed to pull through into the hall.

We were not able to ascertain whether he was attended to as online reporters were not allowed into the collation room.

450 votes cancelled due to snatched boxes and destruction of electoral material.

One polling unit cancelled because of failure to use the card reader.

Three cancellations due to number of votes cast exceeding number of accredited voters.

There was cancellation of results in three polling units due to violence and discrepancy between the number of accredited voters and total votes cast.

11.02: The INEC officials have gone on a little recess, temporarily halting the announcement of results.

Supporters of the opposition People’s Democratic Party are already spoiling for violence as INEC releases results of nine of the 18 local government areas.

They have besieged the secretariat of the INEC at Ikpoba Hill in large numbers blocking the road. 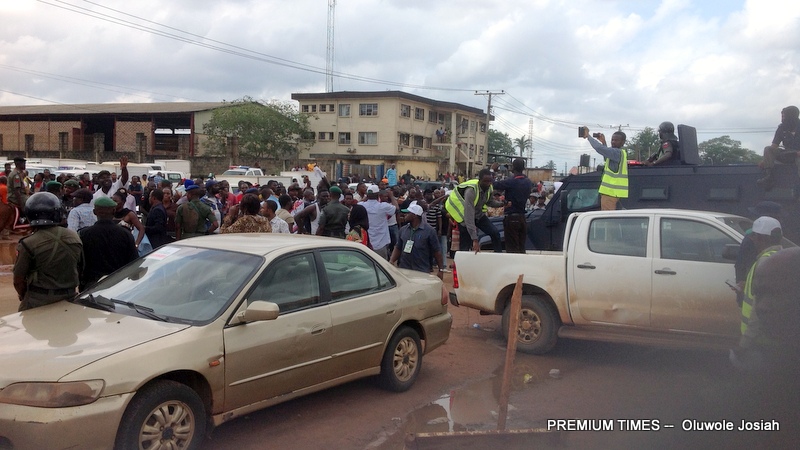 The protesters were demanding the cancellation of the results announced so far.

INEC continues with announcement of results.

A KOWA party agent at the INEC venue where results are being announced called for the total cancellation of the election.

12.46: PDP calls for recount of votes in Etsako East. Says own tally from agents differs from INEC votes. The agent for Action Alliance also called for recount.

13.01: INEC official in Etsako West denies manipulating the results, says a party’s candidate (not named) brought heavily armed men to attack them. He said police officers save him and other INEC officials.

With results from only one local government being awaited, the ruling All Progressives Congress has taken an unassailable lead in the Edo governorship elections.

The result of Ovia South West is yet to be announced as INEC personnel await the return of officials who supervised elections in the council.

Already, the PDP has rejected the results. The party’s chairman, Dan Orbi, alleged that the results were fabricated and predetermined.

The Peoples Democratic Party in Edo State has rejected the results of Wednesday’s elections held in the state.

Only one local government is yet to be announced.

The News Agency of Nigeria quotes the Edo PDP State chairman, Dan Orbi, as alleging that the results were pre-determined and fabricated.

The party rejected the results at a press conference addressed by Mr. Orbih, on Thursday in Benin, NAN reports.

The press conference was also attended the party’s governorship candidate in the election, Osagie Ize-Iyamu.

The party and its candidate said they rejected the results because they were “fabricated and a pre-determined” by the Independent National Electoral Commission (INEC) and the Edo Government.

Mr. Orbih said the results as they were being announced by the INEC, were at a complete variance with what the party got from it agents and independent observers.

He said the two-week extension of the poll by the electoral body was to allow for more time to perfect the manipulation of the process.

“You will recall that our state Publicity Secretary had briefed the press less than 48 hours to the elections on what is playing out now.

“If you go by the results that were announced at the polling units and wards across the state, it shows that PDP would have won by over 30,000 votes.

“What INEC is announcing is clearly different from what we got from our agents and independent observers in the 192 wards and over 2,000 units across the state.

“We are rejecting these results as they were being announced by INEC and we are coming out early enough to make this known,” he said.

The chairman said the cancellation of some results on the basis of failed card reader was part of a deliberate plan to also manipulate the poll.

He alleged that the areas were results were canceled were stronghold of the PDP.

“I wonder what the Incident Form is for. Voters should not be made to suffer unduly for the inefficiency of card readers,” he said.

On his part, the governorship candidate said he aligned himself with the position of the party.

“The results are not a true reflection of what happened in the field. The INEC only played a script written by the Government of Edo,” he said.

13.56: INEC has gone on a one hour recess. The result of the last council, Ovia South West, will be announced after the recess.

The APC candidate, Godwin Obaseki, is expected to be declared winner after the last council result is announced.

The candidate of the All Progressives Congress, Godwin Obaseki, has been declared winner of the Edo State governorship election.

The APC candidate won majority of the votes cast, getting a total of 319,483 votes, the Independent National Electoral Commission, INEC, announced.

Mr. Obaseki also won majority votes in 13 of the 18 local governments in the state, losing the remaining five to the PDP candidate.

The INEC chief returning officer in the state, Professor Kayode Soremekun, who announced the final results, declared Mr. Obaseki the governor-elect of the South-South state.

However, the PDP in the state has rejected the results describing it as adulterated.

“If you go by the results that were announced at the polling units and wards across the state, it shows the PDP would have won by over 30,000 votes,” said Dan Orbih, the party’s state chairman in a press conference.

“What INEC is announcing is clearly different from what we got from our agents and independent observers in the 192 wards and over 2,000 units across the state.”

The PDP agent at the collation centre also refused to sign the final result sheet.

“I cannot endorse it,” he told the INEC officials present. “You said I should get ready for court instead of looking at it here and now. I cannot be a party to that,” he said.

The agent of the Young Democratic Party also refused to sign the final result sheet.

“I have the mandate of the Young Democratic Party not to append my signature on this result sheet,” he said.

Thank you for joining us.

Biafra is dead – DG of Voice of Nigeria, Okechukwu