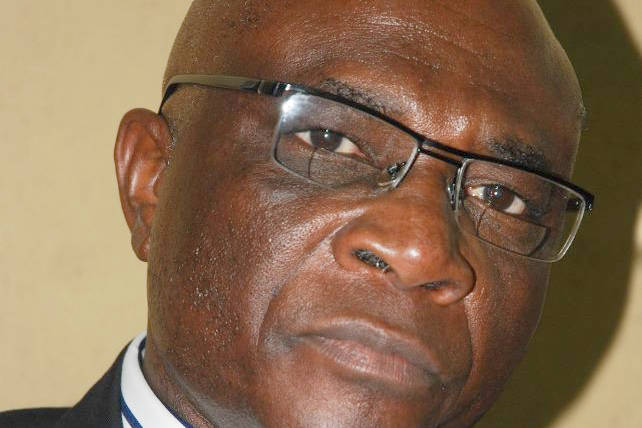 The Managing Director of the News Agency of Nigeria, Bayo Onanuga, has come under fire after accusing the Nigerian media of embellishing reports about the country’s economic crisis that has left families struggling to survive.

Mr. Onanuga accused the media of “over-sensationalization”, and said reports about hardship appeared to be a “mere propaganda”, inflamed by those who lost the 2015 election.

In a Facebook post Tuesday, Mr. Onanuga said his findings showed that the cost of food items had not gone up, contrary to reports in the media.

“I was in Bauchi and Jos at the weekend, I also found that food was cheap everywhere,” said Mr. Onanuga, who appointed by President Muhammadu Buhari last May.

“In our hotel, we paid about N700 for a plate of semovita, or eba with a choice of cat fish or chicken.

“On the roadside, I found to my surprise that with just N1000, I bought over 50 oranges, two giant water melon and 10 pieces of sweet potato.

“I had experienced a similar thing in the market at Abuja, where I found that with N1, 400, I could make a big vegetable soup, with tomato, pepper and roasted Titus fish.

“Are the media and bloggers really painting a correct image of our country? It’s time for the media to objectively conduct a reality check about our reports, whether we are not over sensationalising so-called hardship that we talked about.”

“My daughter was on the Virgin Atlantic Flight that took off from Lagos to London today,” he said. 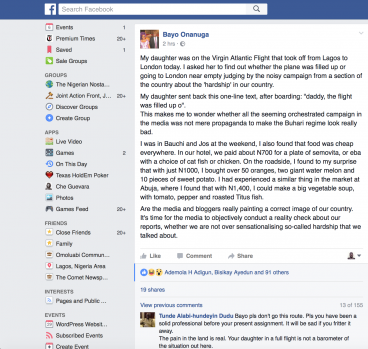 “I asked her to find out whether the plane was filled up or going to London near empty judging by the noisy campaign from a section of the country about the ‘hardship’ in our country.

“My daughter sent back this one-line text, after boarding: “daddy, the flight was filled up o.

“This makes me to wonder whether all the seeming orchestrated campaign in the media was not mere propaganda to make the Buhari regime look really bad.”

A respected journalist, Mr. Onanuga was among those who confronted the tyranny of military rule in Nigeria in the 1980s and 1990s. He suffered persecution during the Sani Abacha dictatorship and fled the country in December 1997.

Before his appointment as head of NAN, Mr. Onanuga, a multiple award winning publisher, editor, and reporter, was the chief executive officer of The News/PM News.

His comments Tuesday drew scathing criticisms from his online followers on Tuesday, with some readers asking him to take down the post.

“Mr. Onanuga certainly does not belong here in the world of Nigerians who daily toil and yet groan under excruciating hardship,” he wrote.

Victor Ojelabi suggested the NAN MD’s account had been hacked. “Someone should please inform him,” Mr. Ojelabi.

Mr. Onanuga confirmed to PREMIUM TIMES that he authored the post. Again, he suggested that the claim of hardship was politically motivated.

But he said he merely posed a question, and had not taken a definite position on the issue.

“I am not saying there’s no problem in our country, but some of the things are exaggerated. I just raised a kind of intervention to ask are these things really true,” Mr. Onanuga told PREMIUM TIMES. “I have seen photographs of children suffering from kwashiorkor and they are passing them off as what’s happening in Nigeria.

Mr. Onanuga said he was not surprised by the criticisms that followed his post.

“Some people have taken position. Some people who lost election in 2015 are still behaving as if they were still campaigning. If you look at some of criticisms, they appear to be coming from a particular section of the country persistently and consistently,” he said.