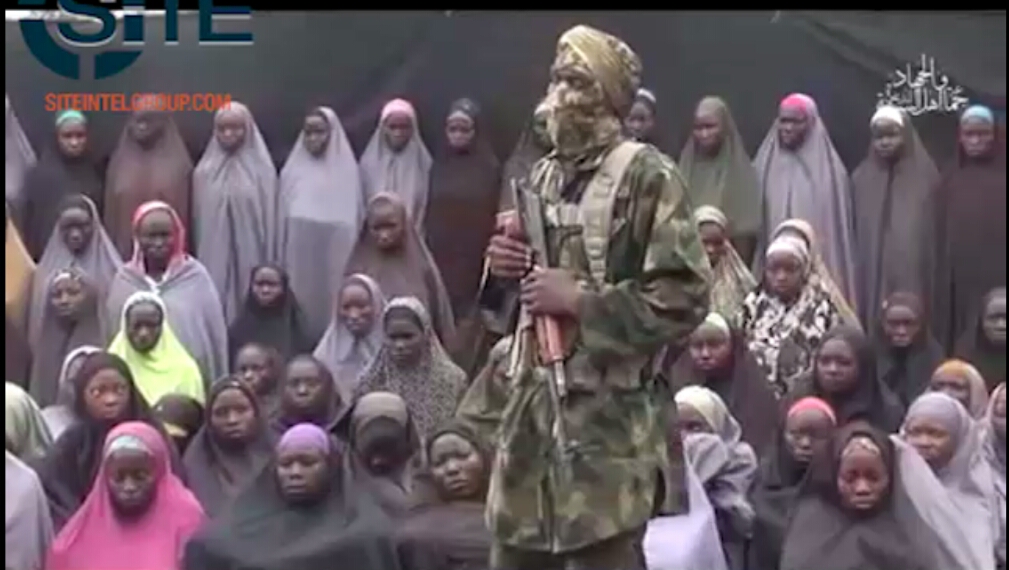 Faced with intense criticism of his government’s inability to free scores of teenage girls held captive by the Boko Haram, President Muhammadu Buhari has restated his government’s willingness to negotiate with the terrorists to free the girls.

Speaking a few days after the families of the over 200 girls, kidnapped from their school in Chibok, Borno State in 2014, asked him to resign if he could not secure their release, the president also indicated that he was willing to do a prisoner swap with the Boko Haram.

The terror group recently released a video showing some of the kidnapped girls. A masked Boko Haram member in the video asked that the group’s members held in various prisons by the Nigerian government be released before the girls could be freed.

In an interview with journalists in Nairobi, Kenya at the weekend, Mr. Buhari said the Nigerian government is ready to dialogue with bonafide leaders of the terror group who know the whereabouts of the girls.

‘‘If they do not want to talk to us directly, let them pick an internationally recognised Non-Governmental Organisation (NGO), convince them that they are holding the girls and that they want Nigeria to release a number of Boko Haram leaders in detention, which they are supposed to know,” he was quoted as saying in a statement by his spokesperson Garba Shehu.

President Muhammadu Buhari has reiterated the preparedness of the Federal Government to discuss the release of the Chibok girls kidnapped by Boko Haram terror group since 2014,

In an interview with journalists in Nairobi, Kenya at the weekend, President Buhari said the Nigerian government is ready to dialogue with bonafide leaders of the terror group who know the whereabouts of the girls.

‘‘I have made a couple of comments on the Chibok girls and it seems to me that much of it has been politicised.

‘‘What we said is that the government which I preside over is prepared to talk to bonafide leaders of Boko Haram.

‘‘If they do not want to talk to us directly, let them pick an internationally recognised Non-Governmental Organisation (NGO), convince them that they are holding the girls and that they want Nigeria to release a number of Boko Haram leaders in detention, which they are supposed to know.

‘‘If they do it through the ‘modified leadership’ of Boko Haram and they talk with an internationally recognised NGO then Nigeria will be prepared to discuss for their release,’’ he said.

President Buhari, who spoke to the media on the margins of the sixth Tokyo International Conference on African Development (TICAD VI), warned that the Federal Government will not waste time and resources with “doubtful sources’’ claiming to know the whereabouts of the girls.

‘‘We want those girls out and safe. The faster we can recover them and hand them over to their parents, the better for us.’’

The President maintained that the terror group, which pledged allegiance to ISIS, has been largely decimated by the gallant Nigerian military with the support of immediate neighbours from Chad, Cameroon, Niger and Benin.

‘‘Some of the information about the division in Boko Haram is already in the press and I have read in the papers about the conflict in their leadership.

‘‘The person known in Nigeria as their leader, we understand was edged out and the Nigerian members of Boko Haram started turning themselves to the Nigerian military.

‘‘We learnt that in an air strike by the Nigeria Air Force he was wounded. Indeed their top hierarchy and lower cadre have a problem and we know this because when we came into power, they were holding 14 out of the 774 local governments in Nigeria. But now they are not holding any territory and they have split to small groups attacking soft targets.

On the militancy in the Niger Delta region, the President said the Federal Government is also open to dialogue to resolve all contending issues in the area.

‘‘We do not believe that they (the militants) have announced ceasefire. We are trying to understand them more. Who are their leaders and which areas do they operate and other relevant issues,’’ he said.