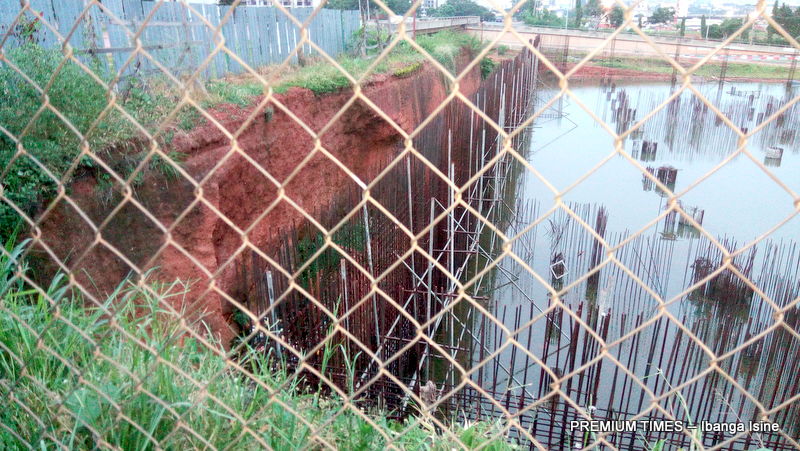 The Code of Conduct Bureau (CCB) has abandoned its multi-billion naira headquarters building after committing N1.4 billion to the project, PREMIUM TIMES can authoritatively report today.

Established in 1989 under the Fifth Schedule to the 1999 Constitution, as Nigeria’s foremost anti-corruption agency, the bureau’s mandate is to maintain a high standard of morality in the conduct of government business.

It is also mandated to ensure the actions and behaviour of public officers conform with the highest standard of public morality.

“The Code of Conduct Bureau has the primary responsibility of checking corrupt practices in the Nigerian public service and has been doing so since 1989,” the organisation said on its website.

The abandoned headquarters complex, located on Plot 816 in the Abuja Central Business District, near Labour House, was awarded in 2010 to Brunnel Engineering Limited for N3.5billion.

The award was contained in a letter with reference number CCB/HQ/CORR/200/14 and dated September 7, 2010.

The letter was signed by the Bureau’s Assistant Director, Procurement, N. Hussaini, on behalf of the bureau’s Chairman, Sam Saba.

Not long after the contract was signed, the bureau released 15 percent of the contract sum as mobilization to Messrs. Brunnel Limited and the company moved to site.

Just as the project got underway, PREMIUM TIMES learned the Federal Capital Territory Administration (FCDA) approved a new design for the site.

The FCDA had at the time insisted that that part of the Central Business District was meant for high rise buildings of up to 18 floors.

In compliance with the directive, the bureau directed the contractor to submit a fresh design for an 18-floor building at the cost of N12 billion.

Based on the new design, the bureau obtained a “Certificate of No Objection” from the Bureau of Public Procurement and raised a fresh memo to the Federal Executive Council (FEC) for approval.

There was however objection by FEC as the then administration said there were no funds to finance the project.

FEC, therefore, ordered the bureau to review the project by reducing the number of floors.

After the project was reviewed to nine floors with four underground parking lots, FEC, on October 31, 2012, approved the review of the contract sum from N3.5 billion to N8.7 billion.

The reviewed contract agreement was signed on February 5, 2013.

But investigation showed that while it was releasing funds for the project in instalments, the bureau expected the contractor to execute the contract with speed.

On July 6, 2015, the bureau queried the company for abandoning the project and cited three warnings earlier issued to the contractor on the matter.

Among other things, it accused the contractor of submitting a defective work plan/undertaking to the FCDA and engaging inadequate workforce without requisite equipment resulting in poor performance.

“In view of the above, you are requested to explain reasons for your rather dismal performance over the years and sudden abandonment of the site since April, 2015,” letter read.

In its response, Messrs. Brunnel in a letter dated August 5, 2015, stated that it shared the concern of the bureau over the project.

It, however, drew attention to the fact that the bureau never mentioned its inability to discharge the payment certificate raised the previous year even when it was grossly undervalued.

“Reference made to our advance payment always exclude the number of instalments and the period over which it was paid,” the letter read.

“Brunnel’s effort and contributions to the project has never been acknowledged in any of your correspondences or meetings. We however remain resolute on the delivery and discharge of the project the challenges notwithstanding.”

“We are fully aware of the constraints of the bureau vis-à-vis budgetary provisions in the 2015 fiscal year, we are therefore working to ensure we can absorb the implication of your sustained defaults while ensuring that the work progress remains uninterrupted.”

Instead of seeking funds to complete the project under the 2016 budget, the bureau rather sought the sum of N4.4 billion for the “purchase of an office building for its headquarters in Abuja.

The amount is contained in the 2016 Appropriation Act having been approved by both the Presidency and the National Assembly.

Already, it has written to the Bureau for Public Procurement requesting guidelines for an outright purchase of new building for its headquarters’ office.

The letter was dated June 7, 2016, and signed by the Acting Secretary of the bureau, Abiodun Kolawole.

On a visit to the abandoned project site, PREMIUM TIMES found that the underground parking lot of the building was water filled and was cutting away the edges of the surrounding lands.

With an erosion threat already underway, the road on which the building is located risks caving in if urgent steps are not taken to control it.

When contacted, the project consultant to the bureau, C. M. Binitie, said he was not aware the CCB was buying a property.

“Only the CCB can give an answer as to why they are trying to buy a new property instead of completing the headquarters complex they started,” Mr. Binitie said.

“I have not been told that the project is abandoned. Why the contractor is not on site is best known to him and why the CCB is trying to buy another property is still a rumour. We have done what is legally possible to bring the contractor back to site but we are yet to hear from him.”

He argued that the alleged plan to buy a new property is strictly between the BPP and the CCB, adding that while his advice has not been sought on the matter, the procurement bureau should advice the Conduct Bureau accordingly.

“I think that the BPP should be in a better position to advise them accordingly because they were a party to the award of the contract to Brunnel. The contract was properly procured and the BPP issued a certificate of no objection to Brunnel,” he said.

In an exclusive interview with PREMIUM TIMES, the Chairman of the bureau, Mr. Saba confirmed the CCB received funds for an outright purchase of its headquarters building.

He, however, admitted that lack of proper funding and delay by the Development Control office of the FCDA, dogged the execution of the project.

“It took FCDA over nine months to give us a certification for the contractor to proceed to site and of course with the passage of time, things began to happen,” Mr. Saba said.

“Coupled with the inadequate funding for that project, I think the contractor found it difficult to continue with the project.”

Asked why outright purchase was not considered at the time the abandoned project was initiated, Mr. Saba said, “It was not the fashion at that time. More so, because there wasn’t any pressing need for that.

“We had thought that within two to three years, which the project was supposed to be executed, it would have been completed. But it was not to be.”

While CCB is the oldest anti-graft body in the country, Mr. Saba said it is the only one that does not have its own secretariat complex.

“Of all the anti-corruption agencies, CCB is the only one that does not have its own secretariat. So if from 2010 when we came in, nothing appreciable has been done, does it not make sense for you to have an option? And if that option is approved by those who appropriate, who am I to say I don’t want it.

Asked what would happen to the abandoned project now that money has been provided for an outright purchase, the chairman replied, “You are asking the wrong person, I am not the contractor and I am not the consultant.

“Yes, the project is that of the bureau, but we have consultants, there is the consultant to the CCB, there is also the federal government’s consultant on this project. So you don’t expect me to be able to answer that question. It should be given to those people or even the contractor to tell you what would be done to salvage it.”

“But we have sat and thought and we agreed that one the measure that can be taken to rescue the project is to have a private public partnership so that the project can be completed.

“Already some people have expressed interest in it. So if and when this project is fully approved and money is appropriated and we have a building that we can enter as a corporate body, then we will go and take some other decisions that we can forward to government for its approval.”