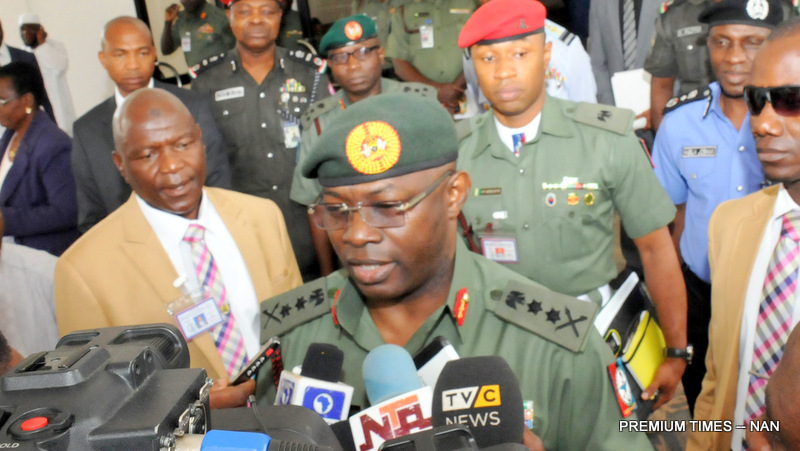 The Nigerian military says releasing Boko Haram fighters in exchange for abducted Chibok schoolgirls is a “political decision” beyond its powers.

The defence chief, Abayomi Olonishakin, said on Monday that the military was “going ahead” with its operations against the sect.

His remarks came two days after Boko Haram released a new video showing the girls that were kidnapped over two years ago.

A Boko Haram fighter who spoke in the video said some of the girls had been killed by military airstrikes, while some were either seriously wounded or married off.

The video showed some 50 girls of the over 200 girls believed to still be under Boko Haram’s captivity.

The armed fighter said the girls would only be released if the government sets free detained Boko Haram militants across the country.

Mr. Olonishakin, a lieutenant general, told journalists after a meeting of service chiefs at the presidential villa that swapping the militants was an entirely “political decision”.

“The military decision is that we are going ahead with our operations. The operation is being conducted appropriately,” he said.

He also denied that the military had turned away any of the three persons it declared wanted on Sunday on allegation of having ties to the sect.

“Nobody reported to my men and was turned back,” he said.

He said the military was still “analysing” the video released by Boko Haram and would make appropriate comments at the right time.

Information minister, Lai Mohammed, who also spoke at the villa Monday, said the government was in talks with Boko Haram sect for the release of the girls.

He said the government was careful to ensure it was speaking with the right group as the sect had been factionalised.

“The government’s position is clear that we are in touch with them. We are just being careful and cautious to ensure that we are talking to the right people especially with the news that there is a split in the leadership. But what is important is the safety and security of these girls,” Mr. Mohammed said.

On the planned match by the BringBakcOurGirls to Aso Rock presidential villa, the minister said the government appreciated the group’s commitment to the return of these girls but “there are few things we need to do behind the scene. What we are saying is that the government is committed to do everything to rescue these girls”.

“We are engaging them. By saying we are talking to them, I am talking from a point of knowledge. It does not matter what other people say. I know that the government is in touch with the group,” he said.

He said the government had not relented on efforts to find and recover the girls.

“For us, it is not just because of the release of the video but because of our belief that there will be no final closure to Boko Haram until we are able to resolve the issue of these girls,” he said.

Woman declared wanted by the Nigerian Army reports to military