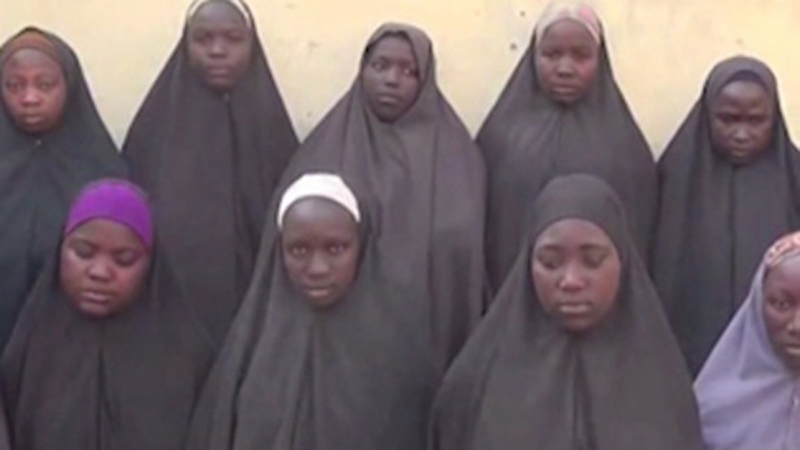 The Abubakar Shekau faction of the extremist Boko Haram sect on Sunday released a new video showing the abducted Chibok girls and claiming that some of the girls were killed by air strikes launched by the Nigerian Air Force on their locations.

The video showed a masked armed man standing in front of several girls, who, he claimed, were the over 200 girls who abducted from their school hostel at Government Secondary School, Chibok, in 2014.

The man said the video was released to send a message to the parents of the girls to beg the Nigerian government to release Boko Haram members in various detention centres in exchange for the girls.

The man said about 40 of the girls were already married while some were dead.

One of the girls, Maida Yakubu, who spoke in both Hausa and her native language asked parents to “be patient and beg the government to release their people, so that we will also be released”.

See full transcript of the video is provided below:

“This is a message from the Jama.atu ahlis sunnah lidda awati wal jihad under the leadership of Abu Muhammad Ibn Muhammad Abubakar As- Shekau.

We are sending a special message to the parents of the Chibok Girls and the Nigerian Government.

We thank God for giving us the opportunity to send this message to the parents of these girls (Pointing at the girls sitting behind him).

It pleased God to let us have these girls in our captivity for over two years now. Our first message is to the parents of the girls to let them know that their daughters are still with us, some of them.

I also want to tell them to ask the Nigerian government to release our brethren especially those in Maiduguri, Lagos and Abuja and other places across Nigeria. They should be released immediately.

You all knew that we had the girls, but God never allowed you to know their location and you will never know by God’s grace. You keep lying in your media that you will rescue them, they have been with us for over two years, yet you can’t even know where they are. You have just been lying about these girls, people should know that.

Also, for the over two years that we have been with these girls, about forty of them are married, some are dead as a result of airstrike by infidels. We will show you a video of how your own aircraft dropped a bomb that killed some of these girls. Some of the girls have suffered fractures and other forms of injuries as a result of the air strikes.

As you can see, these are the girls, all we want is for you to release our brethren otherwise you will never get these girls God willing. This in short is our message to the Federal Government and the parents of the Chibok Girls.

As long as the government does not release our people, we will also never release these girls, that is our message.

I specially inform our people in captivity in Lagos that they should be patient and continue with their prayers, God will take us to where no one expects and we will rescue them. All those in Lagos, Maiduguri and other southern parts of the country. Keep praying, very soon, we will rescue you.

What is your name?

My name is Maida Yakubu

Where are you from?

I am from Chibok town

Where were you picked from?

What is the name of the School?

For how long have you been here?

What message do you have for your parents and the Federal Government of Nigeria?

All I can say is that our (Begins speaking in native language) parents should be patient, beg the government to release their people, so that we can also be released. ( Switched to native language).

Most of the girls standing and sitting behind Miss Yakubu were seen fighting tears and using their hijab to hide their emotions.

Let me conclude this message by saying that many people have been coming to us lying that they were sent by the Nigerian government to get the girls released.

We have dealt with you in the past before and you know our recommended negotiators.

If you need to, you should talk to them. We don’t use our own people to negotiate with you, we use your own people such as journalists to talk with you. We have not sent any other persons. You know that we prefer to use journalist known to you.

Let me say again, release our people and we release your girls, otherwise, they will never be released. If you think you have the power to come and rescue them, go ahead and try.

President Buhari your Army has been lying to you that they have finished us, let them try and see if they can rescue these girls alive.

Video ends with a flying jet and then some female bodies lying on the ground.