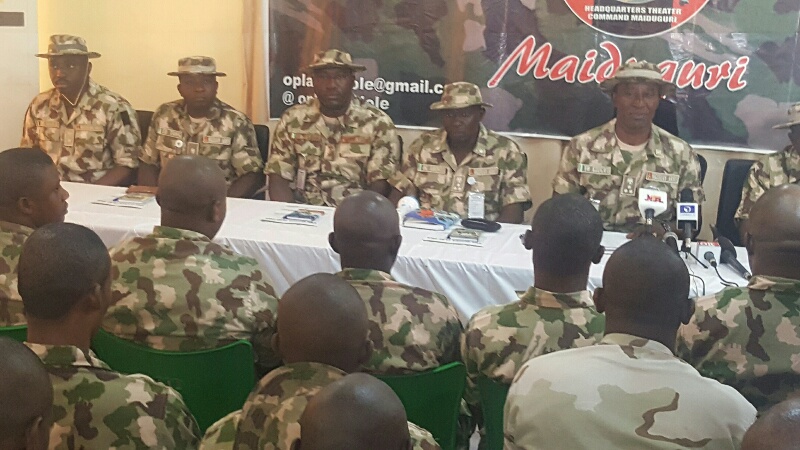 The Nigeria Army’s 7 Division in Maiduguri, Borno State,on Wednesday, set up a general court martial to try four officers and 16 soldiers for offences which include criminal sales of arms to non-military persons as well as abuse of human rights during the ongoing war against Boko Haram in northeast Nigeria.

The 20 accused persons, according to the Acting General Officer Commanding (GOC) 7 Division, Victor Ezugwu, were found wanting in the discharge of their duties in the volatile northeast.

Speaking during the inauguration of the general court martial (GCM), Mr. Ezugwu, a Brigadier General, said he issued a convening order for a General Court Martial “following the directives from Army Headquarters that a standing GCM be set up for Operation Lafiya to try offences committed by personnel within the Theatre of Operation”.

“This GCM is therefore convened to try a total of 4 officers and 16 other ranks of the Nigeria Army who have committed various offences within the Theatre of Operation Lafiya Dole,” he said.

He charged the president of the 8-man court martial panel, Oluseun Adeniyi, to dispense the assignment in accordance with the appropriate laws and devoid of “bias, external pressures or by extraneous factors”.

Speaking to journalists after the inauguration, the GOC said the soldiers to be prosecuted were accused of illegal sales of arms and abuse of human rights.

“Some of them have committed offences that have to do with stealing and selling of ammunitions; some have committed offenses that are contrary to the ethics of professional soldiers; and there are cases of murder that are going to be tried,” said Brigadier General Ezugwu.

“Some of them that have committed offenses that are weighty in nature are the ones we have referred for court martial; while some of them that are within the control of the Brigade commanders and the COs, that can be handled at that level, have been dispensed off.

“The essence of the court martial is that while fighting the insurgency we are mindful of the fact that we have to be above board; we have to be extremely professional,” he said.