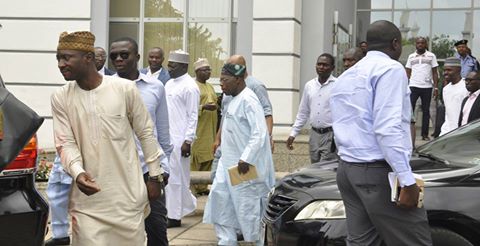 Why they plotted to associate me with a dying PDP — Obasanjo

In a text message he personally sent to PREMIUM TIMES on Saturday morning, Mr. Obasanjo said the reports were a ploy by their masterminds to score “cheap political gains”.

He also said the reports were manufactured to embarrass or annoy him.

He said he was at the Shehu Musa Yar’Adua Centre as guest of Senator Abdullahi Adamu, the Senate Committee Chairman on Agriculture, when some PDP leaders stormed the venue to great him.

PREMIUM TIMES’ correspondent in Ogun State also quoted the former president as saying, “Those who know me, know that I have publicly announced my quitting partisan politics and those who will believe the purported story will believe anybody who tells him that his or her mother is not a woman.

“If I quit a party when it was alive and seemingly united, how could I go back to a now divided, factionalized party grasping for breath?”

Later on Saturday afternoon, Mr. Obasanjo’s office issued a more detailed statement saying, “The attention of the former President, His Excellency, Chief Olusegun Obasanjo has been brought to the photonews story, which has gone viral on the social media on Friday, August 5, 2016 of his purported being “spotted” at a Peoples Democratic Party (PDP) event at the Shehu Musa Yar’adua Centre, Abuja’,the statement reads.

‎’While ordinarily his first reaction to the news was that those behind it targeted to get him annoyed and embarrassed him, his conclusion was that he has told the world that he has quit partisan politics and that is final. Anybody hoping to drag him back will fail like any man feeding mice to a dead cat’,the statement added.

“To clear the minds of doubting Thomas’s and those behind the orchestrated news in circulation and particularly those who had been calling to ascertain what actually happened at the Shehu Musa Yar’adua centre. On the invitation of the Commodities Association Stakeholders, His Excellency, was invited to the “Zero Hunger Nigeria” event at the Centre’, the statement said.

“He arrived at about 10.00am and immediately moved to the meeting. The meeting commenced but few minutes into the session, his attention was drawn to the presence of some people walking up to where he was seated.

“At closer glance, he recognized them to be politicians and they exchanged pleasantries, saying they came to greet him and they walked out again from the meeting. The former President cracked joke with them calling them “invaders and gate crashers”.

The statement said the programme ended and immediately Mr. Obasanjo and his entourage headed back to Lagos.

He said he was barely hours in Lagos when he started receiving calls from far and near wanting to find out about his presence at a political party programme in Abuja.

The statement added, “The photo news in circulation, which claimed that he was spotted at a political party event is therefore mischievous, as a responsible journalist ought to have gone further to ascertain his actual destination in among the number of venues at the centre and not taking photograph of his alighting from his vehicle to read another meaning. Shocking also to note that the picture was actually taken while on his way out of the Centre after the programme he had attended had finished”.

“This is the height of irresponsible journalism, which the former President is calling for its investigation and sanction on anybody involved in order to serve as deterrent to others who may want to be used either by omission or commission to misinform the public on such sensitive issue.”

There were reports on Friday (not in PREMIUM TIMES) that Mr. Obasanjo was sighted at the Yar’Adua centre in Abuja, the same venue used by the leadership of the PDP to inaugurate its national convention committees.

It later turned out that the former president was at the venue for an entirely different engagement.