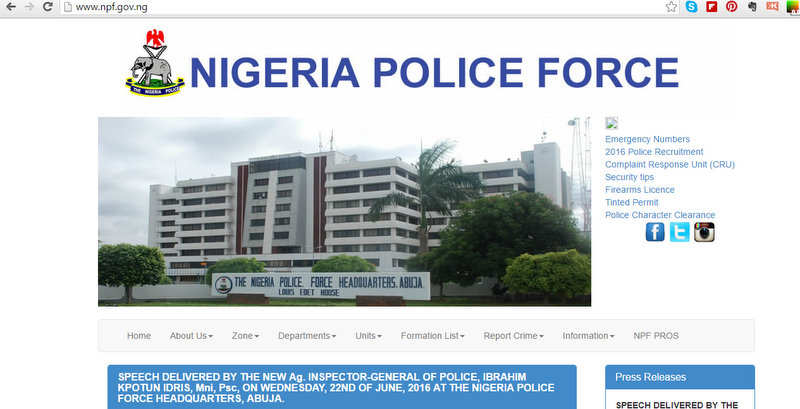 The authorities of the Nigeria Police Force have removed the contacts of some key officers from the organization’s official websites, www.npf.gov.ng, PREMIUM TIMES can authoritatively report today.

Checks by this newspaper showed that the telephone numbers and electronic mail addresses of some of the officials had been taken off the site, leaving just a few.

Shortly after his appointment in January 2012, former Inspector General of Police, Mohammed Abubakar, created the website, making it the most public-friendly online platform in the force’s history.

The force under Mr. Abubakar listed the telephone numbers and email addresses of its senior officials in the website, including the inspector general’s number.

On the platform were two telephone numbers — 0810255558 and 08077446699 – on which Mr. Abubakar could be reached directly by SMS, by members of the public making complaints or seeking urgent police action.

There were also the contacts of the Force Public Relations officer and the public relation officers in zonal commands and in the 36 states and Abuja.

As a result of the innovation, it was easier for citizens to call the attention of the police to emergencies, and for journalists to reach top officials of the force for comments on issues bordering on security.

Apart from the contacts, the website also contained other information, including press releases issued by the Force, thus providing a major link between it and the public.

Mr. Abubakar also created an opinion poll page as a feedback platform from the public. The aim was to know the public perception about the activities of the Force, officials said.

For instance, there was a poll on “whether the decision of the Force to remove road blocks in the highway” was good or bad.

Before then, the only link Nigerians had with the Force on its site’s Home Page for lodging complaints was a contact form expected to be filled by users of the site. The users would have to wait for at least 48 hours to get responses.

The innovation was sustained by Mr. Abubakar’s successor, Suleiman Abba. Mr. Abba however did not however allow his direct line on the Force’s website.

Under him, the website contained the telephone numbers of all the eight DIGs at the time, as well as those of 19 AIGs, 36 state police commissioners and that of the FCT.

That was in addition to the phone numbers of the public relations officers of all the zonal commands, 36 states and FCT police commands.

But as soon as Solomon Arase became inspector-general in April 2015, one of the first tasks he undertook was the removal of the telephone numbers of top officers from the website.

He only allowed the telephone number of then Force PRO, Olabisi Kolawole, and those of the spokespersons of the state commands. That situation remained until he retired last month.

The current IGP, Ibrahim Idris, who assumed office in June retained the tradition introduced by his predecessor, Mr. Arase.

Although, Don Awunah’s name was listed on the site as the new Force PRO, his telephone number is conspicuously missing, making it difficult to reach the main face of the force.

Some of the police spokespersons in the states have been changed since Mr. Idris came to office.

PREMIUM TIMES however observed that the list and contact telephone numbers of the police commands spokespersons were yet to be updated.

Several reporters across the country also told this newspaper that unlike his predecessor, the new Force PRO, Mr. Awunah, hardly answer or return calls or respond to text messages.

He also did not respond to multiple telephone calls and text messages seeking his comment for this story.