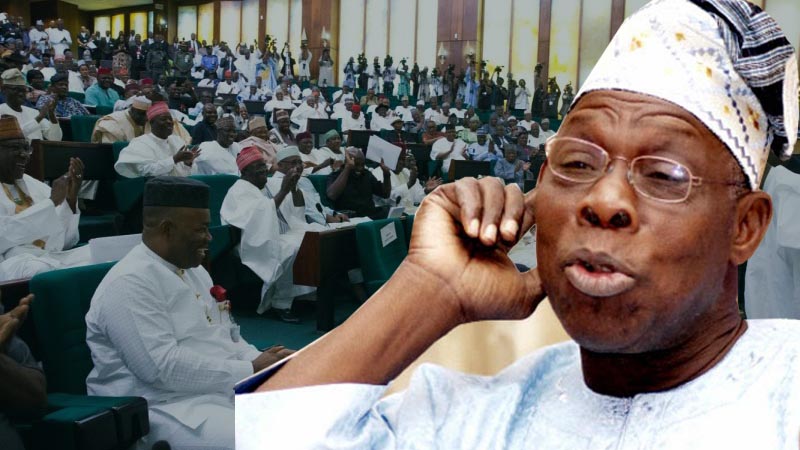 Mr. Obasanjo said shortly after visiting Mr. Buhari at the Presidential Villa that the current crisis in the House of Representatives confirmed his allegation that there were thieves in the National Assembly.

The former president spoke as the rift between the Speaker of the House of Representatives, Yakubu Dogara, and former Chairman of the House Committee on Appropriation, Abdulmumin Jibrin, intensified.

Mr. Jibrin is accusing Mr. Dogara and leaders of the lower legislative chamber of padding the 2016 budget.

But in a telephone interview with PREMIUM TIMES from his Abeokuta home later on Monday, Mr. Obasanjo said on no account should Mr. Buhari release any money in the name of constituency projects to the National Assembly.

The former president said Nigerians should continue to protest the move by federal lawmakers to use the budget to illegally enrich themselves.

Since Mr. Buhari is the only person empowered to release money under the law, Mr. Obasanjo advised the president to only make funds available for expenditures that were legally budgeted for.

“That is criminal and they should be held accountable for it,” Mr. Obasanjo said. “There should be a showdown between what is right and what is wrong. After such a showdown, what is right will definitely prevail and the criminals will be put to shame.”

He said the constituency projects, as being canvassed by the lawmakers, were “illegal, criminal and wrapped in corruption”.

“They are the contractors, the jury, the judge and prosecutors,” Mr. Obasanjo said. “They put the projects in the budgets and they do the projects by themselves or through contractors they nominate. Where is integrity? Where is honesty?” the former president asked.

Still carpeting the lawmakers, Mr. Obasanjo said members of the National Assembly were simply trying to hijack the job of the executive arm of government.

“Who supervises the job? Who ascertains that the job has been done? It is not in their place to execute projects. It is illegal,” he said.

Mr. Obasanjo advised lawmakers interested in having projects executed in their constituencies to go to the executive and make their cases.

He argued that constituency projects were illegal and that Nigerian lawmakers only use them to steal money.

He also said once lawmakers perform the functions of the executive, they would not do justice to lawmaking and would not be able to pass budgets the way they should be done.

The former president lamented that the national lawmakers were using the “constituency projects” to crowd out legitimate and genuine capital projects the executive would have used to develop the country.

The former president said during his tenure, he did not release funds for constituency projects.

“I explained to them that it was the job of the executive to execute projects to develop the country, while that of lawmakers was to approve the budget.” Mr. Obasanjo was president between 1999 and 2007.

He said he also advised federal lawmakers that if they wanted to be in a position to award contracts or execute projects like those in the executive arm of government, they should go and contest elections as local government chairmen, governors or president.

He warned lawmakers against usurping the functions of the executive out of greed, selfishness, lawlessness and criminality.

“They should be lawmakers, not law breakers,” Mr. Obasanjo said.

The former president described the “so-called constituency projects” as a waste of public funds that should not be condoned by any leader.

“The question to ask is: assuming they execute the contracts, although we know they don’t, they usually pocket the monies. But assuming they execute the contracts, what becomes of the projects in future when they cease to be in the National Assembly? Who maintains them? When a project is not built by states, local governments or federal governments, they do not have a future,” he said.

This is not the first time Mr. Obasanjo had descended heavily on Nigerian lawmakers.

In 2012, the former president lashed out at the National Assembly and state Houses of Assembly, describing them as institutions filled with “rogues and armed robbers”.

Mr. Obasanjo spoke at an event in Lagos attended by two former Heads of State, Yakubu Gowon and Ernest Shonekan.

At that event, Mr. Obasanjo referred to the legislature as among the the nation’s most corrupt and inefficient institutions.

“Integrity is necessary for all systems and institutions to be strong,” the former president had said. “Today, rogues, armed robbers are in the state houses of assembly and the national assembly. What sort of laws will they make?”

Mr. Obasanjo again took lawmakers to the cleaners sometime in 2014 at a book launch in honour of a former Chairman of the Independent Corrupt Practices and other Related Offences Commission, Mustapha Akanbi.

At the event, the former president said the National Assembly was populated by corrupt persons.

“Apart from shrouding the remunerations of the National Assembly in opaqueness and without transparency, they indulge in extorting money from departments, contractors and ministries in two ways,” he said.

“They do so during visits to their projects and programmes and in the process of budget approval, when they raise budgets for ministries and departments, who agree to give it back to them in contracts that they do not execute. They do similar things during their inquiries.”

In January this year, the former president wrote Senate President Bukola Saraki and Speaker Dogara accusing the federal lawmakers of corruption, impunity, greed and of repeatedly breaking the nation’s laws.

In a letter dated January 13, Mr. Obasanjo specifically accused the lawmakers of fixing and earning salaries and allowances far above what the Revenue Mobilisation Allocation and Fiscal Commission approved for them.

He also alleged that most of the 109 senators and 369 members of the House of Representatives were receiving constituency allowances without maintaining constituency offices as required by law.

In the letter, exclusively published by PREMIUM TIMES, the former president said on a few occasions, both in and out of office as president, he had agonised over the massive corruption and lawlessness at the National Assembly and other arms and tiers of government.

He said the practices in the National Assembly “which detracts from “distinguishness” and “honourability” because it is shrouded in opaqueness and absolute lack of transparency and could not be regarded as normal, good and decent practice in a democracy that is supposed to be exemplary.”

Nigerian senators like to refer to themselves as “distinguished” while members of the House of Representatives like being addressed as “honourables”.