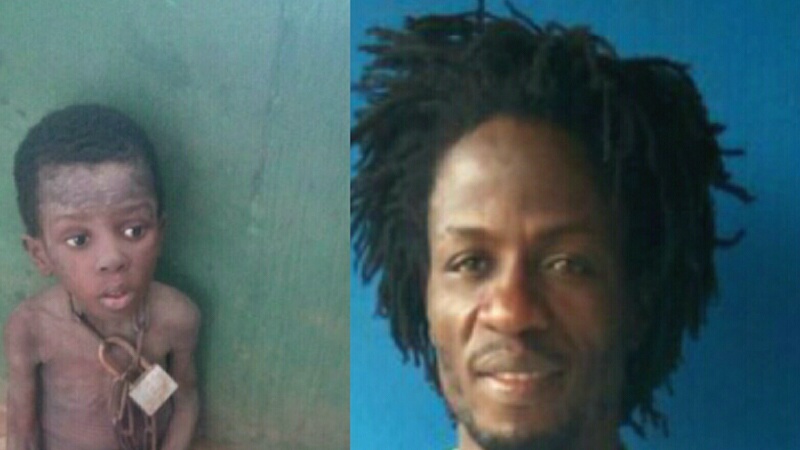 Why I chained my 9-year-old son for weeks – Father

Francis Taiwo, a cleric who chained his 9-year-old son for several weeks, has given reasons for his action.

Mr. Taiwo, pastor of the Key of Joy Celestial Church, was arrested on Sunday after initially evading law enforcement authorities. His son, Korede, was rescued on Friday from the church premises where he was chained and appeared malnourished.

Narrating his case to the police, Mr. Taiwo reportedly said he took the action because he believed his son was possessed with a ‘stealing spirit’ known in Yoruba language as ’emi ole’

‘I chained my son because I felt he is possessed and I’m not comfortable with his stealing habit,” a police source present during his interrogation quoted the suspect as saying.

He also told officials that he married Korede’s mother who bore four children for him before their divorce in 2007.

He said the victim’s mother, Marine Taiwo, was from Delta State and that Korede’s siblings were not living with him.

The 40-year-old suspect, who hails from Benin Republic, said he was born in Ota Town of Ogun State. He said he rose to be a pastor in the Celestial Church, CCC, and was ordained in 2012.

The Church has already distanced itself from the controversial pastor.

“All we can say is that the man is not a registered – or recognized – pastor in the CCC,” a church official sent from the Lagos headquarters told journalists on Saturday.

The police spokesperson, Muyiwa Adejobi, who confirmed the suspect’s interrogation to PREMIUM TIMES, said he would be prosecuted once investigation is completed. Korede’s stepmother is still in police custody for her alleged role in the boy’s ordeal.