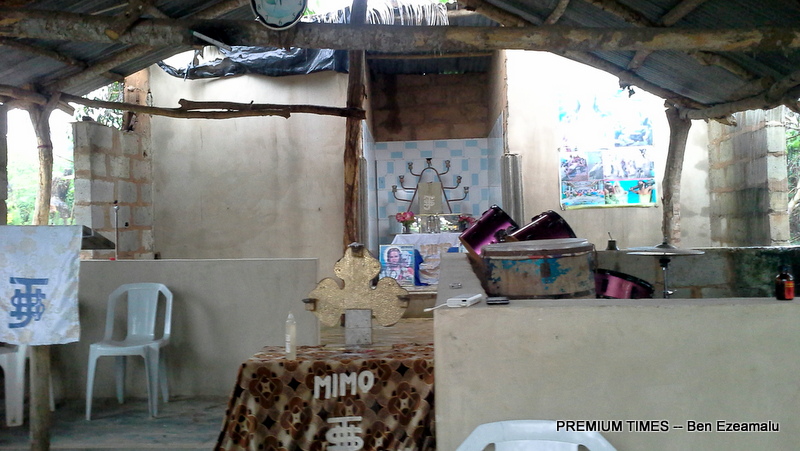 The Key of Joy Parish

Inside Ogun church where 9-year-old boy was chained, tortured

On this rainy Saturday afternoon, a muddy, narrow river of water flowed into a small, deserted, compound deep inside the bush in Ajibawo, a sleepy community in Ogun State.

The Key of Joy Parish of the Celestial Church of Christ is situated here.

The church had been thrown into the limelight after its founder, Taiwo Francis, was found to have chained his son, Korede, 9, on his neck to a heavy log of wood in a room within the premises.

The pastor and his family also live here.

On Friday, officers of the Nigerian Security and Civil Defence Corps (NSCDC), acting on a tip-off, invaded the compound to rescue Korede.

“According to the information from officer in charge of Ado-Odo NSCDC Division who led the rescue operation, the boy had been chained for two weeks at the very Celestial Church of Christ (Key of Joy Parish) the boy was tired and pale, he was not able to talk when he was initially rescued,” the NSCDC said in a statement on Saturday.

“On getting to the church there was serious resistance by members led by the pastor’s wife Kehinde, but Civil defence Corps men insisted, and they were able to force their way into the church premises. The boy was actually under lock and key. They quickly took him to the office for necessary entries and documentation and proceeded to the General Hospital, Ota.

“The boy was bath and one Dr. Akintunde asked NSCDC officials who took him there to give him lucosade boost, they then called on welder to cut the chains so as to enable them administer treatment.

“Before NSCDC left the hospital, he has been responding to treatment as he has started talking. However, the Hospital Medical Director one Dr. Osinbajo who came later assures the Corps that the boy will get necessary medical attention needed.”

A ‘stubborn’ boy and a ‘wicked’ father

Neighbours of the church described Mr. Francis as a “wicked” father.

“The boy is a stubborn boy, always fighting,” an elderly man, who refused to be named because he’s not “one of them,” said.

“He has chained the boy since May, because he stole soup. That he always steals soup in the house and even outside the house. We knew it was a wicked thing to do to the little boy,” he added.

On Saturday afternoon, half a dozen plastic chairs were scattered inside the small church, where wooden pillars and beams support the roof. A wooden table holds a Yoruba Bible (opened to ‘Ifihan’ – the book of Revelation) flanked by an empty glass cup and a candle holder. On the bare wall, near the altar, lay a photo of Jesus Christ announcing in Romans 5:8 that ‘But God demonstrated His own love towards us, in that while we are yet sinners, Christ died for us.’

At the back of the church is a tiny room, where Mr. Francis allegedly chained his son.

Outside the church, a hand-written name of the parish and a phone number usher visitors into the compound. A True-Caller search of the number showed it belonged to ‘Tiler Sango Ota,’ an apparent indication that the owner is a tiler at Sango Ota.

“We came here for investigation, from our main church, but the man (Mr. Francis) is nowhere to be found,” said a man in a flowing, white gown who was part of a two-man team dispatched to the church.

They had earlier communicated with Mr. Francis over the phone and, according to them, he had initially agreed to come and meet them in his house but later backed out because he believed security agents were lying in wait for him.

The CCC members declined to be interviewed because they had not been authorised by the Celestial Church of Christ to speak to journalists.

“All we can say is that the man is not a registered – or recognized – pastor in the CCC.”

A few hundred of metres away, in another Celestial Church parish, Albert Hunkanyin sat in his office, making and receiving phone calls about the incident.

He says Mr. Francis is his younger brother.

“That is the behaviour of the fellow. This person doesn’t use to listen to anything at all. He does what he wants,” Mr. Hunkanyin, Shepherd-In-Charge, CCC, Ire-Akari Parish, Ajibawo, said through an interpreter.

“He did something like this in 2013. This particular boy was missing and he came to this church to come and meet me.

“I had once arrested him with soldiers in 2013 because of the way he maltreats the boy. Other members came and pleaded and he said such won’t happen again.

“Soldiers were asking him why he maltreated the boy the way he did. He beats the boy mercilessly. Ever since then, he has been keeping malice with me.”

After initially evading law enforcement officials, Mr. Francis was arrested by the police on Sunday. Police spokesperson, Muyiwa Adejobi, said he was arrested with the help of his church members.

No group will dictate to my economic team, says Buhari