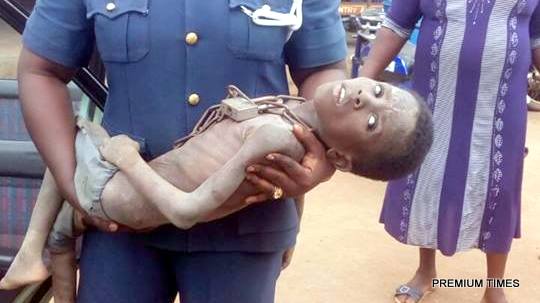 A nine-year-old boy who was chained in Ogun State for weeks before his rescue on Friday, was given the horrifying punishment for allegedly stealing, police and the Nigeria Civil Defence Corps have said.

The NSCDC had said in a statement sent to PREMIUM TIMES on Saturday that its personnel rescued Taiwo Korede from the Celestial Church of Christ (Key of Joy Parish, Ajiwo) at Ajibawo in Ado Odo/Ota local government area of Ogun State.

The statement said Korede was rescued while in chains, and that the case had been transferred to the appropriate authority for further investigation.

Three photographs, including one showing an emaciated Korede in chains, were attached to the one-paragraph statement the NSCDC sent to this newspaper. 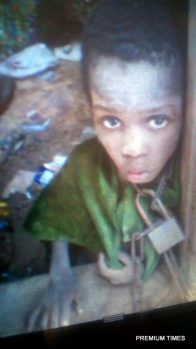 Police later told PREMIUM TIMES that Korede was chained by the neck to a heavy log of wood in a room for “more than a month”.

The spokesperson for the Ogun State Police Command, Muyiwa Adejobi, said the boy was chained by his own father, a pastor in the church, who is currently on the run.

But Mr. Adejobi said the rescue operation was carried out by “police detectives” following a tip off from a neighbour in the community.

“The police operatives of the Command attached to Onipanu Division, Otta, on Friday, 23rd July, rescued one Korede Taiwo, M, 9, from where he had been chained on his neck to a heavy log of wood in a room by his biological father Pastor Taiwo Francis, m, of THE KEY OF JOY CELESTIAL CHURCH, Ajibawo area, via Atan Otta, in Ado Odo Otta Local Government Area of Ogun State for more than a month,” he said.

He said the child’s step-mother, Kehinde Taiwo, who has been arrested by the police, accused the boy of stealing.

The claim that police rescued the boy could not be verified. The NSCDC was first to provide details and photos of the boy in captivity and after his rescue.

In what seemed an attempt to counter the police’s claim, the NSCDC released more details and photos of the rescue later on Saturday. 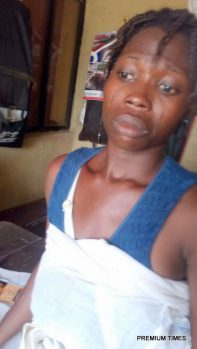 A statement by the NSCDC’s Ogun State PRO, Kareem Olanrewaju, said Korede was chained for repeatedly stealing soup prepared by his step mother.

“She reported to the Father who took step by chaining his hand and legs. This situation was on like that until a Good Samaritan informed NSCDC officials on surveillance patrol of critical infrastructure in the area, they immediately swung into action and ensure the boy was immediately rescued,” the corps said.

He said church members, led by the step-mother, Kehinde, had attempted to stop NSCDC officials from rescuing the boy.

“According to the information from officer in charge of Ado-Odo NSCDC Division who led the rescue operation, the boy had been chained for two weeks at the very Celestial Church of Christ (Key of Joy Parish) the boy was tired and pale, he was not able to talk when he was initially rescued. On getting to the church there was serious resistance by members led by the pastor’s wife Kehinde, but Civil defence Corps men insisted, and they were able to force their way into the church premises. The boy was actually under lock and key. They quickly took him to the office for necessary entries and documentation and proceeded to the General Hospital, Ota.

“The boy was bath and one Dr. Akintunde asked NSCDC officials who took him there to give him lucosade boost, they then called on welder to cut the chains so as to enable them administer treatment. Before NSCDC left the hospital, he has been responding to treatment as he has started talking. However, the Hospital Medical Director one Dr. Osinbajo who came later assures the Corps that the boy will get necessary medical attention needed.

“Meanwhile, the Corps has since liaised with the police at Atan, who promised to continue with the investigation and do all necessary things needed.” 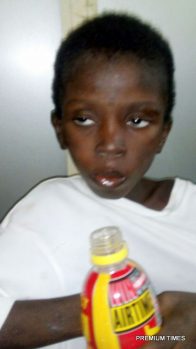 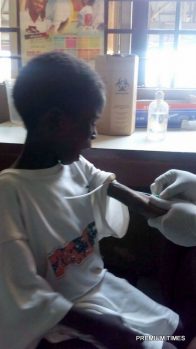