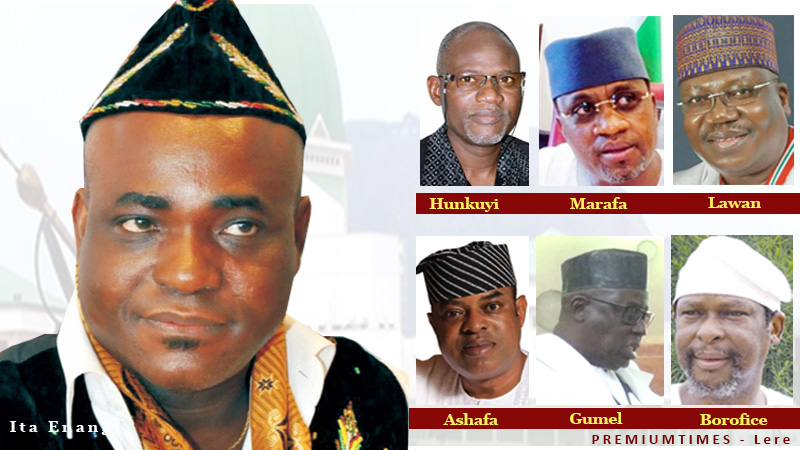 Except there is a change in plan, the leadership of the Senate will severe relationship with the Senior Special Assistant to the President National Assembly Matters (Senate), Ita Enang, and six of its members, PREMIUM TIMES can report today.

The six senators, who might be sanctioned belonged to the self-styled Unity Forum and have been lined up as prosecution witness in the court alleged forgery case involving the President of the Senate, Bukola Saraki, his deputy, Ike Ekweremadu and two others.

The action is coming on the heels of the impending trial of Messrs Saraki and Ekweremadu for alleged illegal alteration of Senate Standing Rule.

Also charged alongside the duo are the former Clerk to the National Assembly, Salisu Maikasuwa and his deputy, Benedict Efeturi.

The duo emerged leaders of the upper legislature against the permutation of the ruling party that favoured Mr. Lawan for the Senate’s top job.

A top official of the Senate, who pleaded not to be mentioned because he was not authorized to speak on the matter, said the leadership of the red chamber felt betrayed by Mr. Enang and the six members.

“The body language of the leadership and most members is that the affected members should be suspended while Ita Enang should be expelled,” the source told PREMIUM TIMES.

“Ita Enang cannot be giving credence to the allegation that the Senate leaders are forgers and criminals and still interface between the Senate and the presidency.

“He has only two options. He either steps down as presidential liaison officer to the Senate and proceed to testify or be expelled. He cannot testify against the Senate leadership and still remain as a liaison between the president and the upper legislature.”

When contacted, Mr. Enang told PREMIUM TIMES he had not done nothing wrong to warrant being expelled by the leadership of the upper legislature, saying he was merely performing his duties to the country.

“I was listed first as a suspect and when the clerk to the National Assembly made a statement that it was he who did and not me, they left me and thereafter listed me as a witness. I have nothing to hide,” Mr. Enang said

However, attempts to speak with Senate spokesperson, Aliyu Abdulahi, failed as he did not answer or return multiple calls made to his known mobile telephone.

Messrs. Saraki, Ekweremadu, Maikasuwa and Efeturi were on June 27, arraigned before Justice Haliru Yusuf of the Federal Capital Territory High Court, Jabi, on a two-count charge of conspiracy and forgery, contrary to Sections 97 and 362 of the Penal Code Law respectively.

They were, however, granted bail before the court adjourned its proceedings to July 12.

PREMIUM TIMES had reported that the Federal Government would rely on the testimony of 14 witnesses, among them Senators and National Assembly bureaucrats, at the trial of the four persons.

Prosecution’s case against Saraki and his alleged conspirators

According to court documents obtained by PREMIUM TIMES, “it is the prosecution’s case against the defendants that sometimes about the 9th day of June, 2015, the defendants conspired among themselves to forge and indeed actually forged the Senate Standing Order 2011 (as amended) and caused the said forged document to be circulated among elected senators for use during the inauguration of the 8th Senate of the National Assembly of the Federal Republic of Nigeria.”

The document – prosecution’s case summary – was signed by a Principal State Counsel, D.E Kaswe on behalf of the Minister of Justice and Attorney-General of the Federation, Abubakar Malami, and is among documents filed before the Abuja High Court.